The Brazilian player hinted in his profile of Instagram that was he the creator of the combed with which the midfield player manchego surprised to all the world in the semifinal of the World-wide of Clubs in front of the Guangzhou. Already there was rapado to Neymar Júnior previously

It seems that the future of Daniel Alves when it hang the boots will debate between devoting to his career of melodic musician doing covers of songs of reggaetón or mount a hair salon. And it is that seemingly, to tenor of the photomontage that published in his account of Instagram, would have been the precursor and ideador of the crest mohicana with which Andrés Iniesta went out to play the past Thursday.

This image was something that surprised to all the world that witnessed the meeting between the FC Barcelona and the Guangzhou. An Iniesta with a combed to the that did not have us accustomed and of the that after the meeting kidded saying "see me younger". It does not know if it was by taste or by some bet, but to fault of official confirmation all indicates that the Brazilian side was the attendant to execute the new "look".

And this is not the first time in which Dani Alves puts in a washed like that. Anteriomente, before the party that confronted to the Barça with the UD The Palms in the Camp Nou, Neymar Júnior also surprised with a rapado almost to the zero that was made by the defender blaugrana.

The image of Neymar first and the one of Iniesta now caused furor in the networks. In the publication made by the Brazilian player in the account of Instagram, can see the photo that shows to continuation together with the legend: "Good morning. The following, please". All a cachondo the good of Dani. 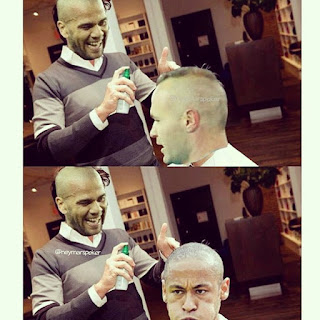 Raheem Sterling, the "covered" of the Barça to reinforce the forward

An OPTION THAT REFUSED

The alternative that proposed him to Laporta to inscribe to Messi

Sergi Roberto's plan to recover his best level with Barça

REMOVED FROM THE CAMP NOU FACADE

MENDES, LEADING IN THE HISTORY OF ANSU

The story of Ansu Fati could be different... and far from Barça?