THE BARÇA MAKES A FRESH START

The FC Barcelona has forgotten the occurred in the Supercopa and, with illusions renewed, affords the second part of the season 2019-20 with the ambition to win everything

It has happened a week, but seems that it have been a year. As if it was a king magician that has happened of date, Quique Setién has arrived to Can Barça with the gift of the illusion under the arm. The Cantabrian technician is transmitting positive energy, optimism and motivation to a staff that was made drowsy with Ernesto Valverde, but that now is had to take out the best of himself same.

So much the usual headlines like the players with less leadership trust that, to base of hard work and sacrifice, the season 2019-20 can finish to the big. The aim is clear, and has not varied neither an apex from the start of campaign in spite of the Russian mountain of results that has lived in the last months: it is necessary to struggle by all the titles at stake.

League, Glass and Champions. Quique Setién never had had to his disposal to a cast of players of world-wide size, "to the best players of the world" like him same ensured during his presentation. Sabedor That the talent that aúna the staff culé does not have it any another team in the world, Quique Setién wants to do upsetting in the big secret of the victory: the proof in thework . 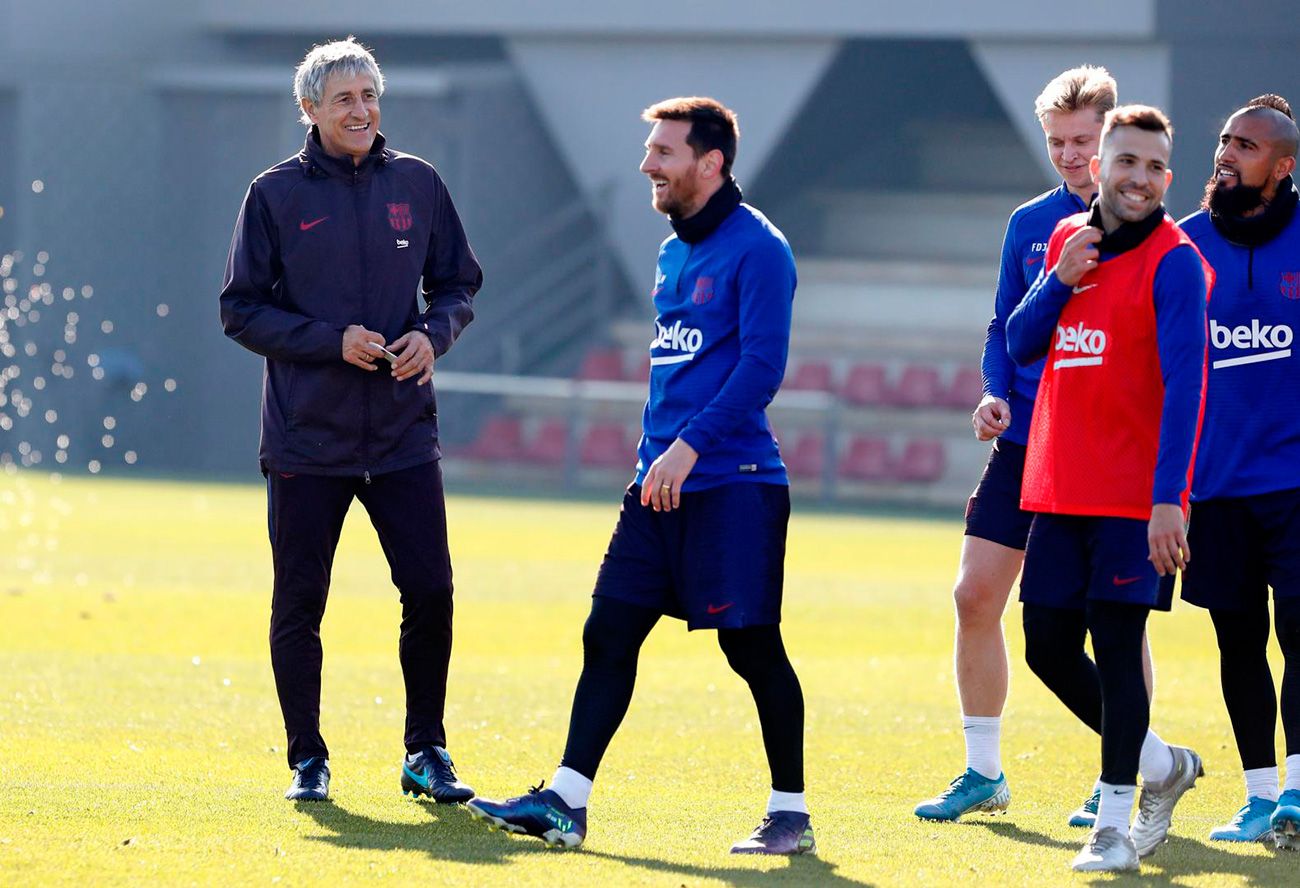 Quique Setién, in the training of the FC Barcelona / Photo: Twitter FCB

The individual talent already has it, and up to now this has been sufficient so that the FC Barcelona lead LaLiga and have classified for the eighth of final of the League of Champions. But Quique Setién aspires to achieve a team in upper case, a group in which all the players have fit, seat important and explode his best virtues.

Something similar to what attained Pep Guardiola in his first year like technician culé, although clear is that this type of situations do not live often in a club. In spite of everything, the Barça already has two tripletes in his list of winners and already know that that there is not two without three.

It will be complicated, there will be obstacles of all type of here to final of season, will arrive injuries and can that some pothole of results. However, the premise is that the team amuse playing to the football and, therefore, amuse also to the barcelonismo with his game. That is the best possible way to the collective victory, the 'DNA' that carries decades characterising to this club and what needs to heave the flight once again.

Barça, there is a letter for you

Quique Setién has arrived more like messenger that like teacher, and wants to remember us to all which have been the signals of identity that have allowed to the FC Barcelona reach the absolute glory in this 21st century. The players are not the same, the rivals have improved ostensiblemente and everything seems much more equalised to measure that happen the years.

It is thus that, in seasons like this, the states of spirit and the dynamic are so important. The team that show more constant at stake and results during this second stretch of the course, will carry the cat to the water. And the Barça wants to be this team. The revolution of the smiles has arrived to the Camp Nou, and has done it to remain .

POLL: Do you think that Riqui Puig will explode in the Barça under the control of Setién?

THERE WILL BE NEWS IN THE MIDDLE

The lineup with whom Quique Setién could debut with Barça

Setién organizes a conspiracy dinner with the players

SETIÉN WILL HAVE TO IMPROVE THE TEAM

The 'hot potatoes' that Setién must solve at Barça

SETIÉN WARNED THAT HE CAN CHANGE THE SYSTEM

The three schemes that Setién can use in Barcelona

Hope in Barça before the most important week of the season

THE '10' VISITED SAN PAOLO AT LEAST

THE 'CLÁSICO' IS IN DANGER FOR RAMOS

Ramos could be punished if the Federation reports his complaints

COUTINHO IS NOT GIVING THE LEVEL

Rummenigge charges against a Coutinho that continues in free fall

This is the Golden Boot: Messi presents his candidature and threatens the favorites

BY THE REFEREE'S CONTROVERSIES

Morales responds to the arbitration complaints of Sergio Ramos

ROBERTSON HAD A MESS WITH LEO

Robertson doesn't forget his incident with Messi: "I am shamed of what I did"

THEY SAID HIM THAT HIS GOAL WAS LEGAL