Desvelan The millionaire agreement of James with the Madrid

Desvelan The millionaire agreement of James with the Madrid

Again the portal "Football Leaks" has made public the agreement of a star of the world of the football. In this case it has touched him to the midfield player of the Real Madrid James Rodríguez. By his index card, the Colombian earns like a star, although his performance have gone down

This gale inside the world of the football that calls "Football Leaks" has gone back to do of his and has hit with strength to the Real Madrid. After desvelar the signing of Gareth Bleat, by a lot of more millions that in which a day enciphered Florentino Pérez his signing, now has touched him the turn to James Rodríguez and his remuneration inside the white group. And this is, as it expected , quite high.

As it can read in the new information revealed by Robin Hood" of the balompié, James Rodríguez arrived to Santiago Bernabéu earning a gross quantity of 7.009.930 euros by season. In that 2014-2015, when the group of Conchaespina paid by him 80 million euros to the ACE Monaco, in one of the most expensive signings of the League BBVA in the last times.

But besides, as it can know thanks to the signed by the white club and the player, the international Colombian achieved this same 2015-2016 an at all despicable rise of his wage. At present, Jame earns 7.759.380 gross euros, with an agreement that finalises inside four stations, in the 2019-2020. Rise that contrast with his low performance during these months.

And it is that the footballer sudamericano was always looked with lupa by the previous technical merengue Rafael Benítez. Benitez Even criticised publicly, and in several occasions, the low performance of the player, attributing him also a low form and even, without saying it openly, an excess of weight. With the arrival of Zidane, the things were not better and even in the party in front of the Betis could see to the desperate Frenchman with him. 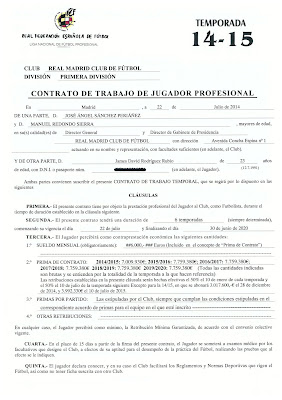 The Brazilian 'pearls' that are in Barça's 'sights' for the future

THE PSG FOLLOWS WITHOUT A '9' RELIABLE

Barça did not fail! Mbappe also tried to 'sign' Lewandowski

THE FORWARD APPROACHED THE '10'

Lewandowski's words to Messi after the Poland-Argentina match

REVOLUTION IN THE GROUP STAGE

FIFA considers a 'new' tiebreaker criteria for the 2026 World Cup

THE CANTABRIAN CONTINUES WITH DISCOMFORT

Pablo Torre continues without being able to play with Barça B

THE CLUB WANTS TO ENSURE ITS FUTURE

Five untouchables: The players for whom Barça will not negotiate

IN SPITE OF RECOGNISING HIS TALENT

THE FRONTS HAD A CROSSING

The embrace of Messi and Lewandowski after the Poland-Argentina

HE PRONOUNCED BEFORE THE MEDIA

THE DIRECTIVE TRUSTS IN HIS RETURN

Is Messi coming? "Leo and Barça have to find each other"