The ex president of the FC Barcelona, Joan Laporta, mofó of the penalti failed by Cristiano Ronaldo against the Málaga in The Rosaleda. The ancient maximum mandator of the Barça shared a "meme" published hours before by Xavier Room i Martín, the one who formed part of his directive

The ancient president of the FC Barcelona, Joan Laporta, took advantage of the infinite dimension of the social networks to share a "meme" that previously had published in Twitter one of the ex directors of the Barça that worked in his board does some years, Xavier Room i Martín, tricking of the penalti failed by Cristiano Ronaldo against the Málaga in The Rosaleda.

And it is that days before, after Leo Messi and Luis Suárez marvelled to the world with the penalti indirect that annotated against the Celtic of Vigo in the Camp Nou, Cristiano Ronaldo ensured in press conference that knew why the Argentinian star had thrown the maximum penalty of this form, insinuating that it had been so that Luis Suárez followed competing him the "Pichichi" of League and, consistently, the Boot of Gold 2016.

The statements of Cristiano Ronaldo generated a big stir between the fans through the social networks, and the "memes" did not take in appearing, especially after the same "CR7" errara this past Sunday a penalti against the Málaga in The Rosaleda (1-1).

"Are why I have failed the penalti... But I do not go it to say", can read in the photographic setting, with a fun image of Cristiano Ronaldo regretting by an occasion failed. Laporta, beside the "meme", published the following message: "you Know why Xavier Room-i-Martín has tuiteado this photo?", adding besides three emoticonos sonrientes. It seems that until the personalities of the world of the football trick already of the words of Cristiano. 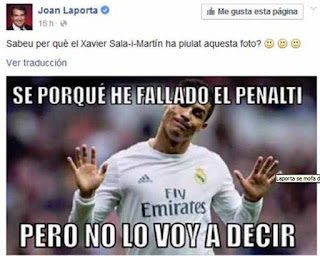 The Premier teams that are going to fight for Umtiti

THERE IS A CHANCE THAT HE LEAVES

The only situation in which Barça would consider selling Dembélé

Ansu Fati, among the 20 most promising young players in Europe

Barça and Madrid, between the teams whose team more have devaluated

Rafinha points to Inter and could lower the signing of Lautaro

FOR WHAT HAPPENED IN SAN PAOLO