The Barcelona group decided to break his links with the forward to the that had presented the past Monday like new player of the FC Barcelona B. Everything is been due to the tuits offensive against the  Barça and against Catalonia that purportedly wrote Guardiola

The one who went to be ones of the oddest signings for the Barcelona subsidiary in this market of winter finally no longer will be it, but no by his sportive conditions neither by his age, but by the controversy arisen to raiz of some tuits that attribute him in his personal account. After several accounts of Twitter took out to the light some tuits offensive against Catalonia and the Barça written, supposedly, by Sergi Guardiola, the FC Barcelona decided to do without his services hours after having it presented.

And it is that the forward was Barcelona player during some hours. After happening the pertinent medical recognition and sign his new agreement, to the night discovered a series of tuits that he same would have written two years ago, in 2013. In these could read attacks against the Barcelona entity and against Catalonia. To part the footballer did gala of madridismo, something that has finish for truncating his possibilities to play in the Barça.

In spite of the attempts of the footballer to avoid that they went out to the light his tuits, first erasing them and afterwards privatising his account, the damage already was done. The Catalan entity finish a communiqué in which it did official the rescission of his agreement: "The FC Barcelona has decided to terminate the agreement of the player after checking that it had published tuits offensive against the barcelonismo and against Catalonia?.

Hours afterwards the player treated to defend in the television program "The Chiringuito", affirming that the tuits had not written them he. In spite of his defence, seemed that yes that it had made them he to tenor of his following words in the program: "it Wanted to ask pedrón to Catalonia and to the Barcelona. I have made a mistake". Guardiola Added that "my family is fastidiada", but to his time "understand the decision of the Barça. If it had been the Barça, would have done the same". 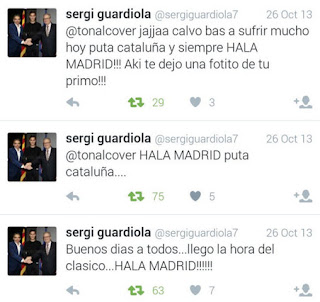 The emotional message from Ansu Fati before his return with Barça

Koeman's Barça, faced with the challenge of stopping a bad dynamic

A MADRID WITHOUT BRIGHTNESS

THE BARÇA, FORCED TO WIN

Everything you need to know about FC Barcelona-Levante de LaLiga

FC Barcelona's possible line up against Levante in LaLiga

Bartomeu prepares a new missile with the Barcelona in looks it

PIQUÉ, PROTAGONIST OF THE EVENT

IN THE PREVIOUS OF THE BARÇA-CÁDIZ

Ansu Fati Is smart...Koeman Expects it!