Although it does some weeks all the surveys reflected the division of the fans about Antoine Griezmann, once confirmed his signing the thought is clear: they will support him

Antoine Griezmann did not act well when, in summer of 2018, decided to trick of the interest of the FC Barcelona -although he did not realise- giving 'pumpkins' to the group culé at the beginning of summer, through a controversial documentary that gave the turn to the world and with which the French wanted to attract the attention mediática. His 'decision' did not seat at all well to the barcelonismo, as it is logical, but no by the fact that it did not come but by the forms.

These same forms, in this occasion the ones to leave , neither have liked to the fans of an Athletic of Madrid that already has him crucificado. Griezmann Is now an apátrida regarding the affection of the fans, to exception of the attraction that generates in a selection of France where, this yes, the big star is Kylian Mbappé. In spite of the last controversies and informations crossed, Griezmann has come to the Barça to have a good time it and to try win titles. 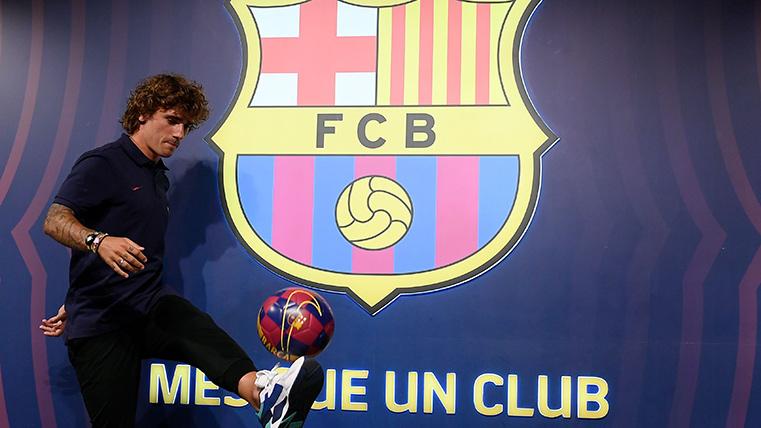 Antoine Griezmann, giving ones touch of balloon in the Barça Store of the Camp Nou

The fans of the FC Barcelona is not naïve, and knows that the Barcelona team has done with one of the best players of the world. Therefore, instead of criticising him and whistle him in mass in the Camp Nou -does not be used to to be something too effective-, will decide to support him and row in his same direction. The French still is not one more and will have to win the affection and respect of the fans culé, but this will not turn away him neither will turn him the face.

The barcelonismo is had to forgive him, as it shows the last survey launched by 'FCBN' in these last days. To the question of "How value the signing of Antoine Griezmann by the Barça?", 55% of the users has answered "loves Me, is a fantastic signing". Simultaneously, 29% follow annoying with the French, but even so it ensures that it will support him because, from this time on, already is new integral of the staff.

So only 13% of the voters follows being against of the signing, whereas to 3% generates him a total indifference. In definite, the results show that the fans culé knows to forgive, or at least generate a favourable context for this.

Griezmann Wants to enamorar to the Camp Nou

Griezmann, sure, will receive more applauses that whistles the next 4 August in the Camp Nou, when to the FC Barcelona touch him confront to the Arsenal with reason of the Trophy Joan Gamper 2019. It will be the afternoon of the official presentation of the staff, and 'Griezzy' will want to do it the best possible. It will be one of the most filmed forwards of the team, explaining that Suárez, Messi and Coutinho will finish to arrive of his holidays. It will have therefore of a lot of minutes, as well as of his first big opportunity to start with to enamorar to the sanctuary barcelonista.

Griezmann: "I want to play in front of my fans"

The FC Barcelona confirms the injury of Griezmann without revealing details

Alarm Griezmann: He noticed annoyances and can lose what remains of LaLiga

THE MADRID CREDITS TO THE PENALTI

The Real Madrid, suspicious specialist in that signal them penalties in favour

A BARÇA WITH TWO FACES

WITH A GREAT LEVEL

Gerard Piqué, marshal and committed leader of the FC Barcelona

THE BARÇA ALREADY KNOWS HIS WAY

If the Barça eliminates the Napoli, will play against of Bayern or Chelsea in Champions

Squad list of Quique Setién for the Real Valladolid-FC Barcelona