ALSO ON HIS DONATION TO RONALDINHO

Leo Messi went back to pronounce through the networks with the same forcefulness that has showed lately. In this occasion, to deny two news

Leo Messi, captain of the FC Barcelona, seems that it has hartado of the diffusion of false news approaches so much of his sportive figure as of his person. In this occasion, reported until three supposed false news published by the media 'TNT Sports THE': one on his supposed signing by the Inter of Milan, another on Newell's and another on the supposed payment of the bail of Ronaldinho.

"What said in this same half on Newell's does some weeks also was false. Less bad that anybody believes them...", it wrote Leo Messi through an Instagram Stories, describing the news like "Lie number 1", "Lie number 2" and accompanying the image with the popular hashtag "#fakenews", that means "false news" and that is used to employ in these cases.

The first news that Leo Messi denied was the one who titled "Thiago Almeida will go to the Inter with Lionel Messi". In the last days, Moratti, ex president of the Inter of Milan, left to fall that the signing of the Argentinian star was not an impossible dream for the club lomardo, and went from here when the rumours began to extend. Something that the '10' denied of conclusive form.

The second news that Messi wanted to describe as false titled , in TNT Sports, as "'The bail of Ronaldinho paid from an account in Barcelona'. It will have paid it Messi? They will go back to play together?". The captain of the FC Barcelona also ensured that this news was entirely false after the ex Brazilian player have gone out of the prison.

Besides, Messi also denied some supposed negotiations with Newell's published by the same media. At the end, so many false news spread on the Barcelona star have finish pro do him lose the patience, reason by which has finish them reporting in his official account of Instagram.

During the last weeks, the captain of the FC Barcelona is showing totally conclusive to the hour of espresarse by means of the social networks. First it answered to Éric Abidal by his statements being totally sharp; afterwards it arrived the communiqué about the descent of wages, in which it aimed to the managerial culé; this time, has signalled to TNT Sports by the news published.

The publication of Messi 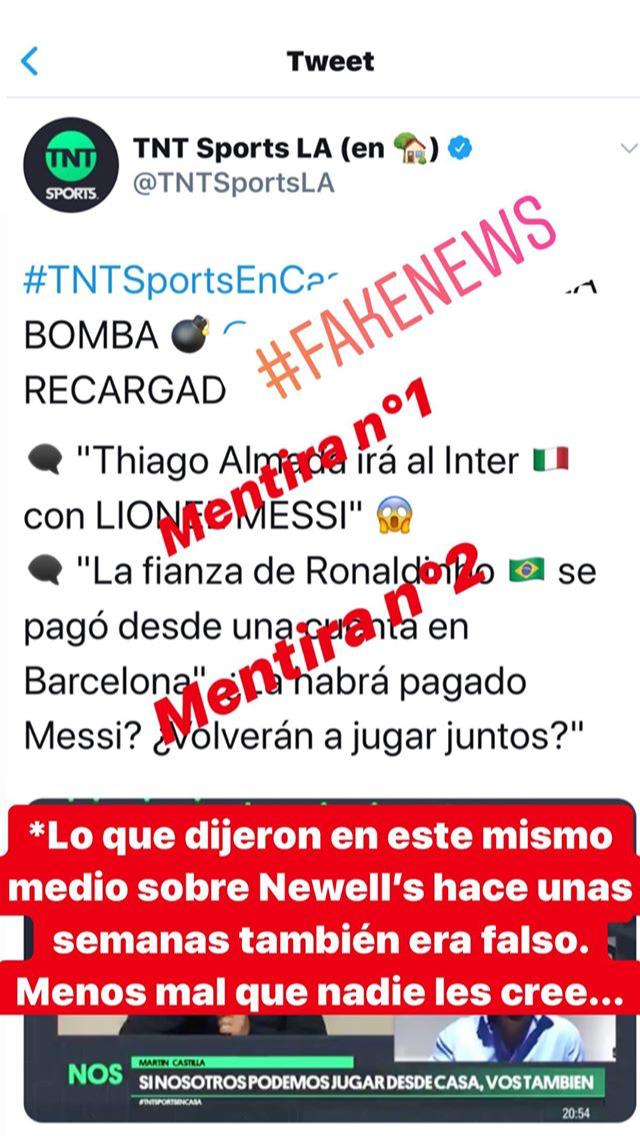 Capture of the Stories of Leo Messi

RUMOURS ABOUT THE INTER

Tebas: "If Messi goes to Italy neither would be a drama"

Today highlights
NOT EVEN WITH ARTURO VIDAL

THE END OF THE RUMOURS?

The Arsenal turns into the big 'covered' to sign Coutinho

SILENCE UNTIL THE SUMMER

NEW AIM OF THE ITALIAN TEAM

Juventus, for an indisputable holder of Barça

GOODBYE TO THE CAMP NOU?

Two options managed by Barça for the transfer of Dembélé

POLL: Which player should leave Barcelona if arrives Lautaro?

THE CULÉS WILL REINFORCE THE SAGA