THE IMAGE OF THE WEEKEND

VIRAL: Messi, with the T-shirt of Newell's of Maradona after scoring a great goal!

Leo Messi wanted to have his particular homage to Diego Armando Maradona just after scoring a great goal in the Camp Nou. The '10' posed with the T-shirt of the 'Lint' in Newell's

There are images that cost more than one thousand words. And the one who saw this Sunday in the Camp Nou, to fault of a chamber of hour for the end of the Barça-Osasuna, is one of them. Leo Messi transformed an authentic golazo from out of the area, an obús imparable for the guardameta of Osasuna, and just afterwards wanted to have his particular homage and memory to Diego Armando Maradona.

'The Flea' removed the Barcelona T-shirt and posed with the one of Newell's Old Boys in the times in that the 'Lint' was a member of the club rosarino. With the dorsal '10', the old elastic rojinegra placed and signalling to the sky with the hands and the look, Leo Messi starred the most special homage that have lived this weekend to the big Argentinian myth of the football. An instantaneous that has not taken in viralizarse through the social networks.

From the past Wednesday, when it died Maradona to his 60 years, the homages to the 'Lint' had gone making progressively in all the stadiums, parties and sports. In spite of this, the most special surprise had it saved Leo Messi under his T-shirt. The captain of the Barça was especially motivated to mark and do a good party, for like this surrender honours to one of his big mentors and models to be followed inside the field.

Messi, formed in Newell's Old Boys and follower of 'Ñuls' from boy, played with the elastic that lució Diego in the club rosarino under the Barcelona. Very little time was Maradona in the team rosarino, hardly played seven parties, but Messi saw it debut with 6 añitos and this image remained him recorded in the head, in a very special corner beside the rest of memories that has of the 'Lint'.

Homages and more tributes for Maradona in the Camp Nou 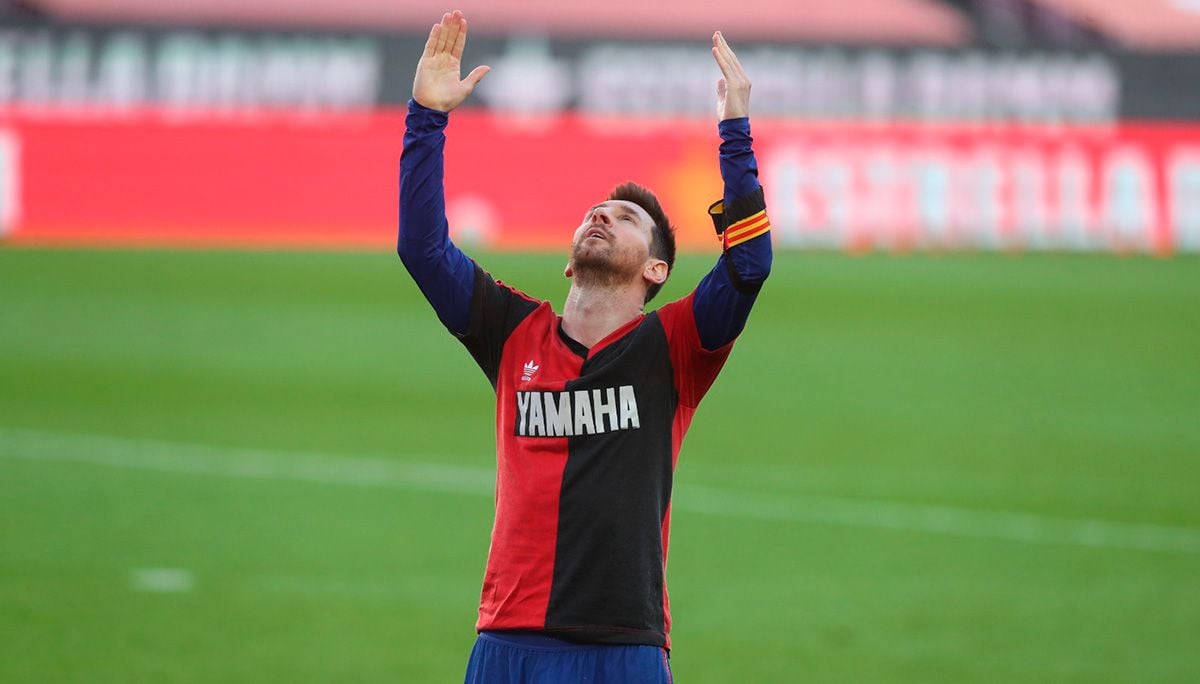 Leo Messi, surrendering tribute to Maradona in the Camp Nou

After the target and the celebration of Messi with the T-shirt of Newells', that took hardly some seconds in doing viral and run like the gunpowder through the social networks, from the Argentinian club quickly reacted: "Of 10 to 10, of leproso to leproso. The best of the world and his homage to D10S, with the colours of the heart. Diego, Eternal", tuiteó the official account of the Argentinian team.

Further of the celebration, shortly before did viral another image of Messi during the crash that remembered to the famous hand of God of Maradona to England in the World-wide of the 86. The forward of the Barça jumped with the left hand raised, although it shrank it en última instancia leaving that the balloon went in after a finish of Braithwaite that cost to the Barça for the 1-0.

It fits to take into account that, in addition to the particular homage of Leo Messi, so much the players of the Barça as the ones of Osasuna lucieron a black bracelet in signal in mourning by the death of Maradona, and before the party saved a respectful minute of silence in which it could see a cushion of Barcelona flowers with the dorsal '10' in the centre of the field. Of equal way, the T-shirt signed by Maradona that is in the museum chaired all the party in the grandstand.

Great goal and entertainment for Griezmann: Volley and exhibition against Osasuna

ANOTHER GOAL MORE FOR THE DANISH

Braithwaite, in state of grace! Third goal in a magic week with the Barça

Two 'galacticos' have been offered to FC Barcelona and would arrive for free!

FEAR WITH THE FRENCH FORWARD

Renovation or sale? The keys to the future of Ousmane Dembélé

It fINISH AGREEMENT IN JUNE

Revenge anticipated by Messi: FC Barcelona wants to 'steal' a player from PSG

It BANISHES A POTENTIAL SALE

CANDIDATE To THE ELECTIONS

Cornellà vs FC Barcelona in TV: When and where see the match

A lot of ROTATIONS

COMPANY SPONSOR OF THE BARÇA

The players of the Barcelona received his new vehicles of Cupra

Depay: "I want to go to one of the three best teams in the world"