The presidential candidate of the FC Barcelona, Víctor Font, has kept a virtual meeting with the partners in which has answered to FCBN on his plans of future for the club

Through 'Zoom', Víctor Font gave answer to the interests of some partners and means this Monday in the afternoon. The presidential candidate of the FC Barcelona, originario of Granollers and to his 48 years, carries the last seven (from 2013) preparing with mimo each detail of his candidature, outlining each piece of a gear that expects that it allow to the club go out to float economic, institutional and deportivamente after the management of Bartomeu and his.

During the virtual meeting, Víctor Font answered to the questions of FCBN and gave more tracks on which have to be the keys of his future mandate (if it is that it consummates ), going through on of proper names of the size of Leo Messi, Ronald Koeman and Antoine Griezmann, in addition to other topics of conversation that are in the street like the constant debate that arouses the application of the VAR in LaLiga. 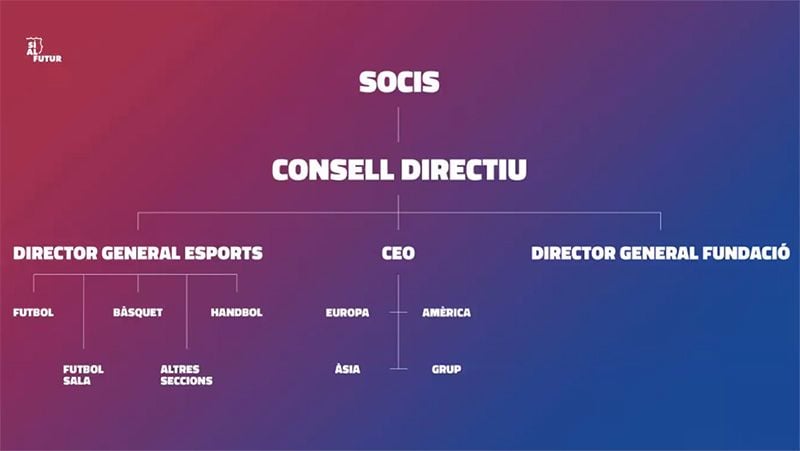 The model of organisation chart of the candidature of Víctor Font

We think that Xavi is the best person for comandar this project, so much by capacity of leadership as by technical knowledges, futbolísticos… And from here build all the organisation chart, the one who would like us promote. In the case of Koeman, his continuity or is not an example of decision that has to be in hands no of me, but of our sportive structure. We respect the organisation chart, so this structure would be the one who would decide if Koeman follows like trainer, if it situates him in another place of work of the club...

It is another example of decision that would not take I, but the members of our sportive structure. It is necessary to sell to the players that give worse performance, and from here reinforce to the team with youth and talent to keep on being competitive in LaLiga and in Europe.

It is evident that when we have sold to Luis Suárez have not brought to any spare. The trainer asks to Depay, but I think that a 'nine' is a position that would be very well cover, and there is a lot of 'nueves' spectacular. One of them is Erling Haaland, a footballer to the one who would do me a lot of illusion have. Although I think that it is well that manage the expectations of the partners of realistic form. The pandemia has put us in a critical situation and will not be able to do all the big signings that want, at least in the short term. But always we will be able to base us in the talent that already have, to base of quarry...

It is something public and already have explained it to us in the last days. The situation is critical. We are about to to go in in contest of creditors. But on the other hand, this situation still can revertir. Have a very grave problem in the short term. What have to do now is to go in in the club, reflect a big restructuring and go out of this situation the before possible. And from here, look to the future.

We bet more by the format marathon instead of the format sprint. We carry gestando this project from 2013, whereas other candidates still are doubting of if present or no, and in this appearance we already have a lot of work done. We find us in a very delicate situation, and in the next five years the club as we know it is in risk... We find us almost in the edge of the precipicio, and therefore we need a plan of crash, to people with solvency to make a restructuring in the economic part of the club, and besides have to carry out a more effective management of the costs and, especially, that the income of the club keep growing. Still there is a lot of margin of improvement in this appearance.

We want to put to the partners on top of the all, and that have capacity of decision in the symbology and other key appearances of the club, that no only can decide each true years to choose president, but it democratise the club and make queries vinculantes so that they take decisions. Also it would like us do queries no vinculantes in other respects, for like this orient our decisions chord to the massive posture of the partners.

For example, we want that Nike propose us every year three or four options of T-shirt and that they are our partners those that choose with which remain us. We do not want that it keep on being a decision imposed by part of the multinational and of the managerial board, but the partners and partners participate and think.

I come with new people, 80% are people that never would have thought in being managerial of the Barça. They are new people and that does not have any economic need, of ego or public visibility to serve to the club. This protects us in front of personal interests.

We think that it is indispensable that the association between Messi and the Barça continue, that go further of this year, the one who comes or the next two or three. We believe besides that it has to go further of when it withdraw ... Have had to the best of the history has an incredible potential and is an opportunity of gold that it is necessary to take advantage of in all the senses.

I create in the VAR like technology of support, but if they execute it the same referees that have the same deficiencies that those that are in the field… Then the situation is until worse that before, because the errors are even more grave when having the screen in front. Besides, sometimes what also appreciate is that they do not do good use of the technology. Instead of teaching all the played whole, for example, take a piece. It happened with the penalti of Lenglet to Bouquets in the Classical.

The argument of Laporta not to share candidature with Víctor Font

It SPOKE OF HIS PLAN OF FUTURE

Víctor Font pronounces on the future of Koeman and Leo Messi

Today highlights
THE PLAYER IS A 'SHOT' FROM BARÇA

The tremendous 'wink' of Lewandowski's agent during his visit to Barcelona

FROM LONDON THEY HAVE ASKED ABOUT HIM

Memphis Depay could leave Barça for a 'great' in the Premier

SANTOS BORRÉ, HERO OF THE FRANKFURT

Eintracht stays with the Europa League after beating Rangers on penalties

THE GERMANS CELEBRATED IN SEVILLE

Honor to the champion: Barça's congratulations to Eintracht after winning the UEL

THE DIRECTIVE HAS MANY DOUBTS

Bayern's dilemma with Lewandowski: The Pole is irreplaceable

HIS PRIORITY IS TO PLAY IN LALIGA

Barça 'ties' Raphinha: The Brazilian waits for an offer

IF THEY DO NOT LOSE IN GETAFE

Xavi's Barça, one step away from entering the club's history

DUE TO THE POSSIBLE EXIT OF LENGLET

MBAPPÉ WILL EARN A MILLIONARY FIGURE

Barça filters how much money Kylian Mbappé asks for

THEY HAVE COMPARED HIM WITH RONALD ARAÚJO