The Barça has contested 13 finals in the last 10 years

The Barça has contested 13 finals in the last 10 years

With the classification for the final of the Glass of Rey, the Barcelona ensure his presence in the 13ª final in the last 10 years. Of the hand of Rijkaard, Guardiola, Tito Vilanova and now Tata Martino, the Catalan team follows competing to the maximum level

The winning cycle of the Barça seems not having end. The final of the Glass of Rey, against the Real Madrid, will be the number 13 that contests the team culé in the last 10 years. A figure that confirms the hegemony of the Catalan team during the last decade in the world-wide football. These 13 finals, contrast with the figures of the Real Madrid: 4 finals and all of Glass.
In fact, the Barça is the team that more final has contested (13), of which went out victorious in nine (fault for contesting the final of glass of this year, what could increase the figure to ten). The second of the ránking is the Bayer of Munich, the German team has contested 11 finals and has won eight. In third place finds Chelsea. The team trained by José Mourinho has contested 10 finals, going out victorious in five of them. 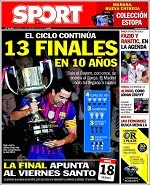 Definitely, one of the most surprising data of this list is the position of the Real Madrid. The white team only has contested 3 finals (four with the final of Glass of this season), winning one. Taking into account the investments multimillionaires of Florentino Pérez, the failure of the team madridista is evident. To do us an idea suffices with checking that Manchester United (8), Seville (6), Athletic (6) and Milan (4), are by in front of the whites in finals contested in the last ten years. Besides, it fits to stand out that the 4 finals played by the Madrid, included the next of Glass, are in a lower competition. In fact, the white group has not contested any international European/final in the last decade.

The 8 teams that more final have contested in the last 10 years:

A key moment: The details of the last offensive of Barça for Eric Garcia

GETAFE WILL WIN MORE THAN THE BARÇA

Lost opportunity of Barça with Cucurella: Chelsea offers a fortune

THREE PLAYERS OF BARÇA, THE KEY

Barça and Arsenal are negotiating again for Mattéo Guendouzi

LUCKYLY HE WOULD COME FOR 'SEMIS'

THE CHILEAN COULD END UP BY STAYING

Barça is rethinking the continuity of Arturo Vidal

HE WANTS TO SUCCEED AT THE CAMP NOU

Griezmann is non-transferrable at Barça... But with a condition

BARÇA DOESN'T COUNT WITH THEM