Pairings of the Eurocopa of France

Pairings of the Eurocopa of France

This Sunday has celebrated in Nice the draw of the previous phase of the Eurocopa of France of the year 2016. The Spanish selection, current champion of the tournament, has remained placed in the group C together with the ones of Ukraine, Slovakia, Byelorussia, Macedonia and Luxembourg, "a priori" a quite affordable group for the cojunto of Vicente of the Forest

This Sunday to the midday has celebrated in Nice the draw of the phase of classification of the Eurocopa 2016, that will have headquarters in France. The Spanish players of the FC Barcelona have seen like the combined of Vicente of the Forest, valid champion of Europe and of the world, remained placed in the group C, together with Ukraine, Slovakia, Byelorussia, Macedonia and Luxembourg. The Holland of Afellay will play in the group To, with the Czech Republic, Turkey, Latvia, Iceland and Kazakhstan.
Less luck has had the host selection, France, that has remained matched in the called group of the death together with Portugal, Denmark and Serbia like rivals more powerful. Also it stands out the presence for the first time of Gibraltar, that will do his debut in an international competition. Of this way, Hammered them, Busquets, Iniesta, Pedro and company will have to contest a total of ten commitments between 7 September 2014 and on 13 October 2015, period in which it will contest all the phase of classification.
It is necessary to remember that they will access directly to the final phase of France the two first and the three better third qualifiers of each group. The rest of third of group will play an eliminatory to complete the 24 teams of the Eurocopa, the first edition with this new format wider.

Like this it remains the phase of classification of the Eurocopa 2016: 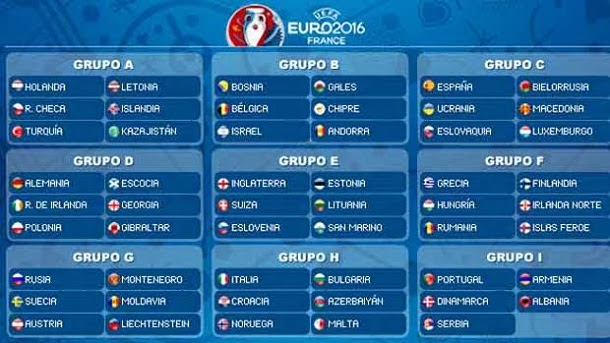 Barça's main objective after the World Cup in Qatar

DESPITE THE ENDING 'DRAMA'

No surprises: Argentina beats Australia (2-1) and is in the quarterfinals!

1,000 MATCHES AS A FOOTBALL PLAYER

The 'engine' of Argentina! Leo Messi signs a great game on a historic night

CONTINUES TO BATTLE FOR HIS HEALTH

THE FORWARD APPROACHED THE '10'

Lewandowski's words to Messi after the Poland-Argentina match

A FUTURE PROBLEM FOR BARÇA?

A mess in the selection of France 'splashes' to Barça

DEFINED: Crossings and times of the round of 16 of the World Cup in Qatar!

DURING THE SUMMER MARKET

Lewandowski was not the only one: Mbappé wanted to take a 'crack' from Barça

THE CLUB WANTS TO STRENGTHEN

The Brazilian 'pearls' that are in Barça's 'sights' for the future