The message of Georgina to Antonella, another approach Cristiano-Messi?

Once again it remained showed that the rivalry between Cristiano Ronaldo and Leo Messi is only in the terrain of game, in where they litigate continuously for being the best footballer of the world. But out of there, both have left in evidence that they do not carry badly, and that when they attain to see, keep good relation.

Another demonstration of this occurred through the social networks. The wife of the Argentinian published a photo with his greater son, Thiago, the one who fulfilled years: "Happy Fulfils Thiagui. I do not have words to say you all what sos for us. Always with a smile and this peace that transmitis. We love you and I go you to be followed filling of kisses although it do not like you", expressed the wife of the Barcelona captain. 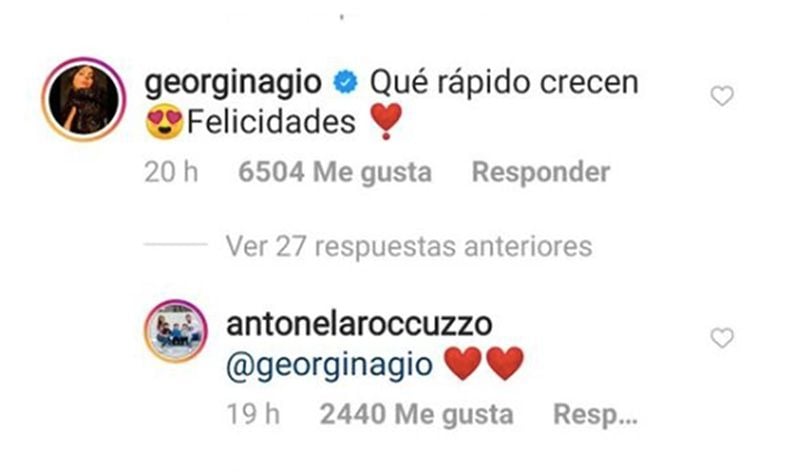 The message of Georgina to Antonella Rocuzzo by Thiago Messi

By his part, Georgina Rodríguez stood out between the more than 8.00 messages that received the publication, and wanted to be part of the congratulation leaving a comment: "What fast grow. Happinesses", expressed the girlfriend of Cristiano Ronaldo. Likewise, Antonella answered to the detail planting hearts in the comment of Georgina.

In the photography, appears Thiago with the complete uniform of the present season of the Barcelona, what shows once again the fanatical that it is of the group 'culé', even could be one of the main reasons by which Messi decided to follow dressing the Barcelona T-shirt, like this had explained it the own Argentinian when saying that Thiago "did not want to change of school neither of city".

The bond of Antonella and Georgina

To the equal that Lionel Messi and Antonella, the couple of Cristiano Ronaldo and Georgina Rodríguez is one of the most popular in the world of the football, together add almost 300 million followers in his social networks, in where constantly they share together photos and receive the maximum quantity of 'likes' and comments.

It fits to stand out that it is not the first time that the couples of both footballers share in Instagram, as both had followed from does long, even are used to to exchange 'likes' in the majority of his photographies. An example of this was one of the videos that shared Georgina beside his daughter Alana, fact that received a "likes me" by part of Antonella.

When they will go back to see Messi and 'CR7'?

Calendar FC Barcelona
Related Content
THEY HAVE TO HEAVE HIS VOICE

Rapinoe: "Messi and Cristiano could do so much if they decide to combat the racism..."

Marking is way different for Messi and Cristiano

LAMPARD GETS 'WET' IN THE DEBATE

Today highlights
NEWS IN THE OPERATION OF THE '9'

THE AFRICAN AIMS FOR THE EUROPA LEAGUE

The time is now: Kessié is facing his chance to get into the eleven

IN ADDITION TO 50% ON FUTURE SALES

DIRECT TO THE YOUTH A OF THE CULÉS

THE CAPTAIN COULD LEAVE DURING THE SUMMER

Crazy! This would be the irresistible offer of Al-Nassr for Sergio Busquets

SEVERAL GAMES OFF FOR THE PIVOT

FC Barcelona vs Sevilla on TV: When and where to watch the LaLiga game

This is how LaLiga is on matchday 20: Madrid put the title on a platter for Barça!

THE TEAM NEEDS TO BE REINFORCED

What does Barça need to compete for the Champions League in the 2023/24 season?

BARÇA WOULD HAVE TO SELL

POLL: Which striker should Barça sell in the summer?