'El Mundo' has had access in the last hours to the document of the supposed agreement that signed in November of 2017 Leo Messi with the FC Barcelona, and that would be ruining to the club

The newspaper 'The World of the 21st century' has published, in his edition of this Sunday, an information that is giving the turn to the world through the social networks. It treats of the agreement that signed Leo Messi in November of 2017, and that there would be desangrado economically to the FC Barcelona in the last years, aggravated even more the situation of the club by the effects of the pandemia that began the past year.

In the document in question, explains that the Argentinian star of the Barça has "a Pharaonic agreement that ruins to the club", to the that plants an exact figure: 555.237.619 euros. The newspaper ensures that the '10' signed in November of 2017 "a document that awards him until 138 millions between fixed and variables" by course. An agreement that includes two premiums: one for accepting the renewal (115.225.000 euros) and another in concept of fidelity (77.929.995 euros).

"The figure is the sum of fixed wage, rights of image, a series of prime unpublished multimillionaires to date, diets and a rosary of variables depending on diverse aims", underlines the quoted half on the total of 555.237.619 gross euros that would appear in the current agreement of Messi, signed on 25 November 2017 and with date of caducity in June of 2021. 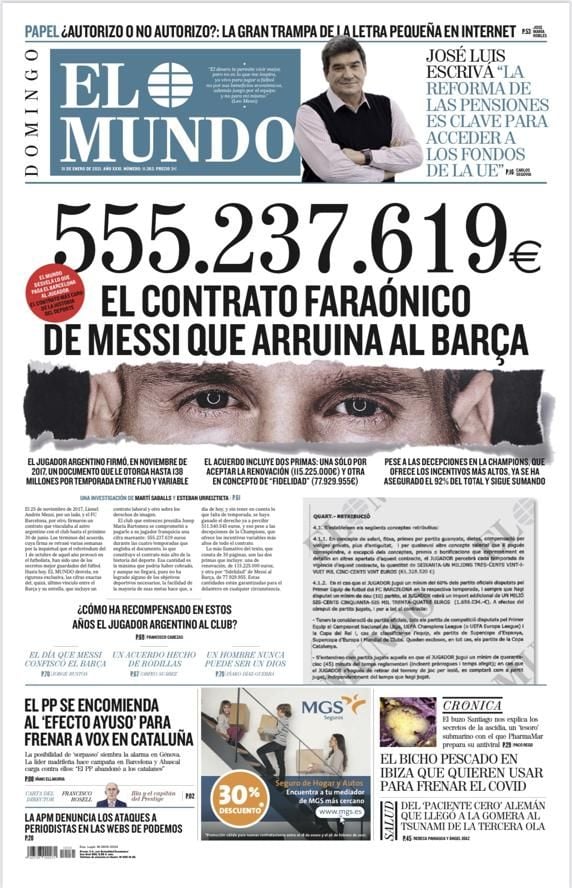 The cover of 'The World' that desvela the agreement of Messi

Although it is true that in the last years the FC Barcelona has not been able to win too many titles of relief, being shipwrecked year after year in Champions League from the final of Berlin in 2015, 'The World' ensures that Messi already would have ensured 92% of the agreement, in spite of not receiving the highest bonuses in concept of international titles like the League of Champions.

"The net computation, once applied the taxes (the highest type of the income tax for the pertinent income of his labour agreement, and the one of the tax of societies for the pertinent income of his agreement of image), in addition to the deductions of the Social Security, represents more than half of this quantity: around 297 million euros", can read in the Spanish newspaper.

'The World' also signals that "anualizada, the remuneration represents 138.809.404 gross euros (74.900.000 net). Or, what is the same of form desglosada, 380.299 gross euros to the day (210.297 net euros)". It treats of some quantities to which it is necessary to add the performances of the exploitation of his image, "a section that the player reserves ". The news, was as it was, already runs like the gunpowder in the means of all the world.

Serious warning of Joan Laporta to the PSG on Leo Messi

The records that Messi could surpass in the Copa del Rey

The precandidates to the presidency of the Barcelona, any will convince to Messi?

Today highlights
THE SURROUNDINGS IS OPTIMISTIC

The Barça, near of a solution in the 'case Depay'

EMERSON COULD BE KEY

Lautaro wishes to leave of the Inter, and the Barça follows attentive

WITH 30 EFFECTIVE IN THE STAFF

The Madrid could complicate in the exit of several players

The Madrid, had to play everything by Kylian Mbappé

PJANIC COULD RETURN TO TURÍN