A sponsor of Neymar shows him by mistake wearing a Barça t-shirt!

Barça and PSG ar getting without time to close an agreement for Neymar, but there are a lot of experts that think that the brazilian will play in the Camp Nou. One of his sponsors has shared by mistake an image in which he wears the 'azulgrana' t-shirt

The market of signings of the summer 2019 comes to an end, and the case Neymar still does not have solution. The PSG has confirmed that the forward wants to leave and that has descartado to all his beaux less to the FC Barcelona, but the two entities do not attain to put of agreement and the traspaso has not materialised when hardly they remain two days so that the window estival throw the closing.

Along the negotiations there has been altibajos, but the feeling was this same week that the one of Sao Paulo would return to the Camp Nou. Anybody could ensure it for sure because the throw and slackens carries long active, but so much his surroundings like some gathered expected that all the parts will concretise his interest in a pact that had to fix to half way between the requirements of each one.

Such era the convencimiento that one of the sponsors of the Brazilian has thrown to the swimming pool and has dressed to the crack of Barcelona. This same Friday, 'GaGà Milano', his mark of clocks, shared an image of the ex of Santos luciendo one of his last models and ataviado with the elastic barcelonista of this season, in a publication that very soon began to run like the gunpowder.

The company did not take too much in erasing the instantaneous, but already was too late. His content turned into viral and flew through the social networks, where the fans asked if the Italians have of privileged information or if rather one of his employees was a follower culé with many win that there are official news.

Neither it is missing the suspicion of this was a strategy of marketing concealed, since this error can go out profitable to the company. Miles of users are seeing the capture of one of his accounts in which it appears a world-wide star like Neymar dressing the zamarra of the Barça, but also a clock in which a lot of will fix . Every cloud has a silver lining. 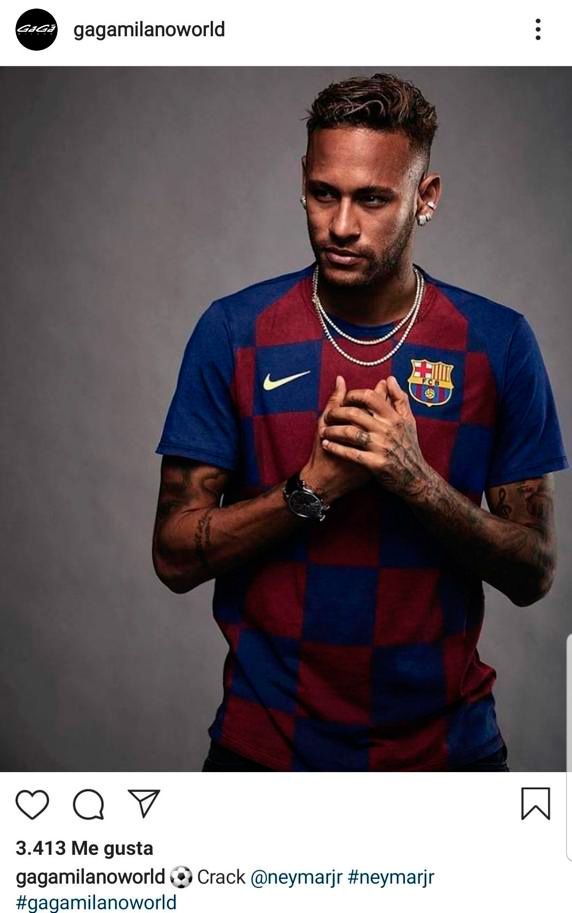 The case Neymar is to some hours to resolve

For well or for bad, the case Neymar is to some hours to resolve , and the attacker follows presionando so that they leave him change of airs. In France ensure that the PSG already has convinced to Ivan Rakitic and Jean-Clair Todibo, and that would be slope of Ousmane Dembélé to close the deal with the Barça, that is not satisfied with the last contraoferta that did him arrive the Parisians.

What Neymar could contribute to Barça 2020-21

Inter could change Lautaro Martínez for a colombian pearl

THE DANISH WANTS TO TRIUMPH

The promise of Braithwaite to Barça fans

HIS RENEWAL IS PENDING

Good news for Barça: Bayern moves away from Ter Stegen

NEW DETAILS ABOUT THE OPERATION

Barça players whom Inter do not want in the 'Lautaro operation'

The Real Madrid takes a decision with Cristiano Ronaldo

Unexpected 'signing 'for Barça's midfield? "My wish is to come back and stay"

Barça's reaction to the interest of Inter on signing Messi

Iniesta pronounces about a possible return to the FC Barcelona