Overwhelming victory of Los Angeles Lakers against Miami Heat, having advantages of more than 30 points. The pair Lebron-Davies was insuperable for the ones of Florida

After almost 2 months and half of confinement in the bubble of Florida, the last party of the season contested this morning to give back to Rey" Lebron his crown. Los Angeles Lakers and Miami Heat confronted in the sixth party of the finals with an advantage of 3-2 for the purple and gold.

From the first chamber, the team directed by Frank Vogel used his best weapon to carry the victory, a big defence and fast exits to the counterattack. With a high rhythm and very concentrated defensivamente, at the end of the second chamber, in the equator of the party, the ones of California already dominated the marker by a sonrojante 64-36, some 28 points of difference that no longer would recover the ones of Florida.

The Heat, with a big Jimmy Butler in the previous 5 parties, could not repeat the gesta in this definite meeting. With 12 points, 7 rebounds and 8 assistances, the new superestrella of the championship played one of his greyer parties. In the franchise of Florida stood out Bam Adebayo, with 25 points 10 rebounds and 5 assistances but the heat missed the points of Tylor Herro and Duncan Robinson.

With the initial team without adding the sufficient points, from the bench neither arrived the reinforcements, giving the feeling that was being missing them petrol. They tried to recover to Dragic to have a man more with which rotar, but con a recent injury, was not to his level and did not contribute what expected of him. At the end of the third chamber, the eliminatory already was decided. The last time used it the ones of Eric Spoelstra to retouch the final marker. 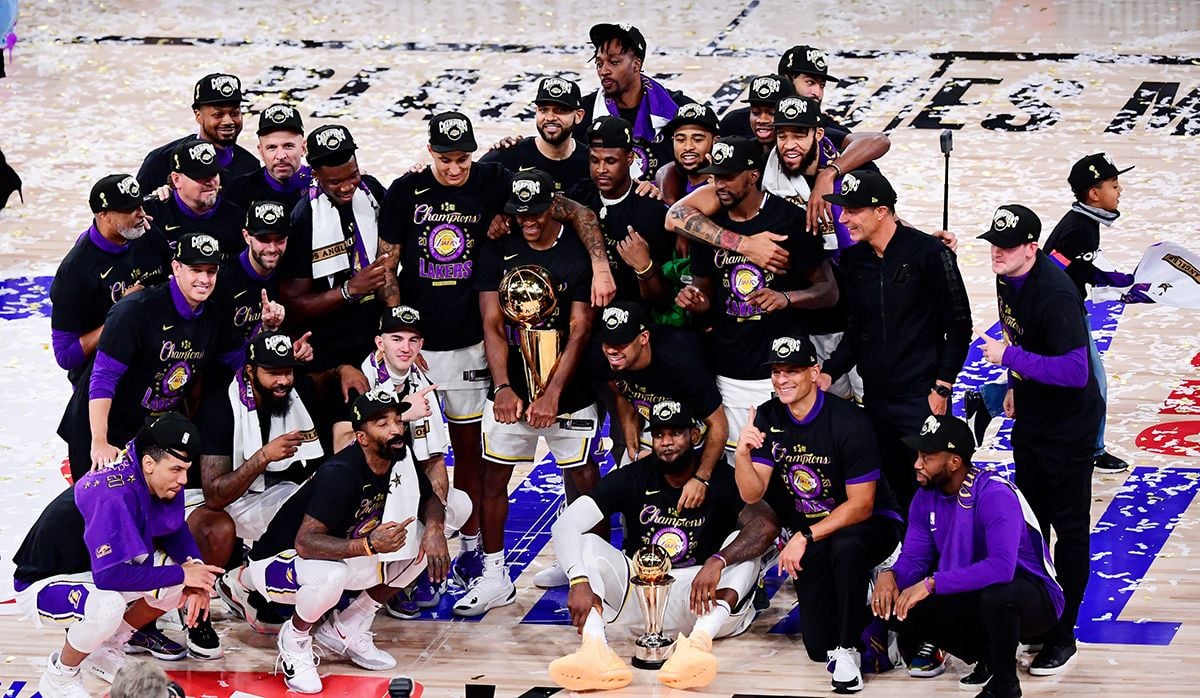 Los Angeles Lakers, celebrating the ring of champions of the NBA 2019-20

In the team champion, fits to stand out the big meeting of a Lebron James that with 35 years went back to show that it is in a big level ofform . With 28 points, 14 rebounds and 10 assistances achieved his 28º triple double in the final phases of the NBA, leading the second place of this ranking surpassed only by the 30 of "Magic" Johnson.

The team surrendered well and this noticed it all the players, helping go in if to be able to surpass to the rival. Big party of "The eyebrow", that in his eighth season in the most important competition of the basket world-wide attained the longed for ring. Together with Lebron, dominated the duel in the offensive and defensive phases.

As third man resurgió Rajon Rondo, with 19 points, 4 rebounds and 4 assistances. The basic of 34 years took advantage of of his experience and went determinant going out from the bench to assist and annotate for his mates. With the ring of tonight, turns into the second player of the history that wins the championship with Los Angeles Lakers and Boston Celtics.

17 titles for the Lakers, that equalise to the Celtics

With 17 championships, the Boston Celtics dominated the league with superiority. His big enemies, the Angels Lakers, until this morning, looked them from below. With the victory in front of the Heat, now the angelinos have achieved to equalise the strengths and increase the rivalry between the two franchises.

Saturday, 8 of May of 2021 16:15h
Estadio Camp Nou
Calendar FC Barcelona
Today highlights
PSG HAS NO DOUBTS WITH LEO

COMMUNICATION ON THE INJURY OF ANSU

THE BARÇA WANTS A MIDFIELD

The 3 options that Barça handles to reinforce the midfield

THE BIG DOUBT OF KOEMAN

Barça has the 'new Busquets' they are looking for at home

THE BARÇA HAS A LIMIT

THE PROJECT POCHETTINO "IN CRISIS"

MESSI WOULD CONTINUE UNTIL 2023

The reasons by which Laporta will struggle by fichar to Neymar