THE WORST NIGHT OF CHAMPIONS

Barça reveals images of the costumes after the Liverpool debacle

Last season, FC Barcelona conceded four goals in Liverpool that eliminated him from the Champions League. The club now publishes internal images of that night

The one of the past day 7 May will be remembered like one of the most black nights in the history of the barcelonismo. This day, the FC Barcelona faced with illusion the turn of the semifinals of the Champions League against the Liverpool, in a party that contested in Anfield and for which the team culé had three goals of advantage of the party of gone.

Everything seemed had so that the culés assisted to a day of glory to happen to another historical final of Champions League, but everything twisted . In the first time, the Liverpool already warned with a tempranero goal of Origi and forced to the Barcelona to employ in attack. Nevertheless, the fault of puntería of Philippe Coutinho, Leo Messi and Jordi Alba, that had very clear occasions, would finish happening bill.

Already in the second time, the Liverpool grew and, without Mohamed Salah and Roberto Firmino, his two big stars, ran over to the group of Ernesto Valverde. Anfield Tightened and the goals were falling for mermar the possibilities of a FC Barcelona that, of the same way that there was sucedido in Rome a year before, saw how the three goals of advantage did not serve him for nothing.

Of course, the defeat supposed a very hard hit for the changing room culé, that remained entirely desolado after the disaster. A fatal night that finish repercutiendo in the end of season, since the Barcelona, with the morals by the floors, also fell in the final of the Glass of the King in front of Valencia.

Recently, the FC Barcelona announced that in October will première the documentary series Matchday, that includes in one of his chapters unpublished images of the changing room of the FC Barcelona in the night of the defeat against the group of Jürgen Klopp. This Friday, has launched the trailer of the series and, in him, include images of this chapter. 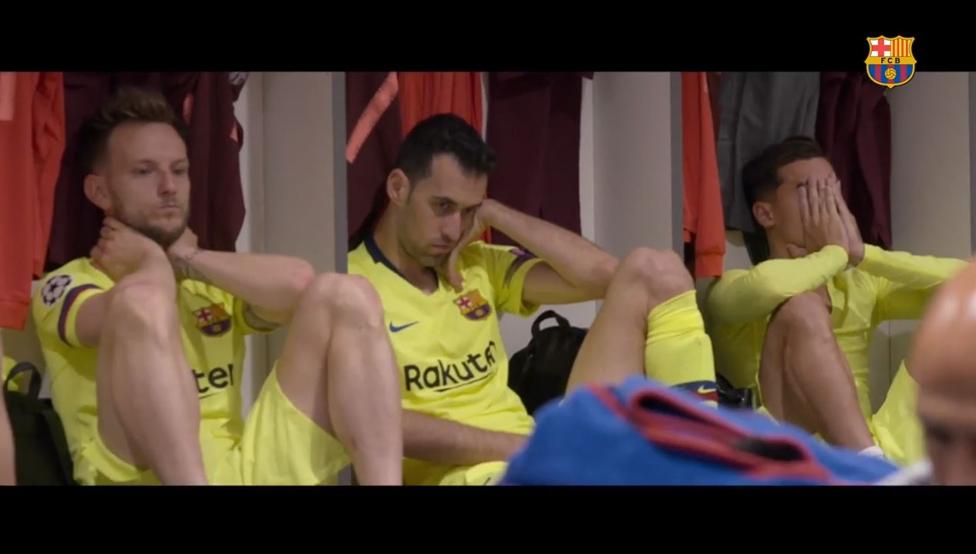 Busquets and the rest of players, desolados after the Liverpool-Barça

Little it sees in the trailer, but yes there are some instants in which it can see to Ivan Rakitic, Sergio Busquets and Philippe Coutinho entirely knock# down after the defeat. In this party, the things did not do well, by what the team has to replace and learn for future occasions.

Liverpool keeps tricking Barça with the goal of corner in Anfield

Luis Suárez, about the disaster in Liverpool: "I didn't want to go out"

HE IS ALMOST RECOVERED FROM HIS INJURY

Bartomeu revealed the future of Messi: "I have no doubt that he will continue"

SEMEDO SEEMS ANOTHER AFTER THE STOP

Nélson Semedo, one of the best news for Barça after the break

BARTOMEU DECLARED OF THE TRANSFERS

Bartomeu, cautious with the signing of Lautaro and negative with Neymar

THE STARS SUPPORTED THE YOUNGSTER

THE EGARENSE HAS IT CLARO

The signing that Xavi recommends to Barça... and the two that he advises against