Ifrán Asks if González and Teixeira were bought

Ifrán Asks if González and Teixeira were bought

One of the players of the Real Sociedad, Diego Ifrán, has written a communiqué in his account of Twitter in which it puts in doubt the honesty of the referees when pitan to Barça and Real Madrid. The 'txuri urdin' thinks that the arbitration of the eliminatory was not just 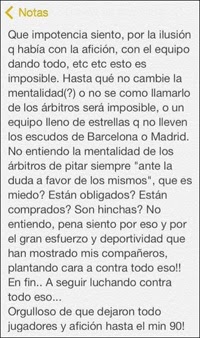 Hours after the turn of semifinals between Real Sociedad and FC Barcelona, a player 'txuri urdin', Diego Ifrán, has hanged in Twitter a very hard communiqué that puts in doubt to the Spanish referees when pitan the parties of Barça and Real Madrid. The performances of González González (that no pitó a clear penalti of Mascherano to Sail) in the gone and of Teixeira Vitienes in Anoeta would have woken up a true unrest in Donosti. "I do not understand the mentality of the referees of pitar always in front of the doubt in favour of the same. What is, fear? They are bought? They are you inflate?", it says a part of the writing.
"Pena seat therefore and by the big effort and sportsmanship that have showed my mates, planting expensive against all this! Anyway, to be followed struggling...", it continues the footballer, in some words that could have consequences of part of the Technical Committee of Referees, that could report him in front of the Committee of Competition.

Eternal rivalry between Barça and Madrid: Who has the most valuable squad?

ACCORDING TO ARTIFICIAL INTELLIGENCE

A 'Clasico' equalized? This is how Barça and Madrid arrive at the clash

The Barça of Koeman, more and more distant of the essence culé

LOTS OF PLAYERS CAN DEBUT

A 'Clasico' for a lot of debuts: Who will debut at Barça-Madrid?

Thomas Tuchel and the harshest criticism of PSG, Mbappé and Neymar

ACCORDING TO THE DAILY 'AS'

NEWCASTLE WANTS THE '11' FOR FREE

Viable? The new strategy to see to Haaland like culé

AFTER MARKING IN HIS LAST PARTIES

The Barça, attentive to a young promise compared with Haaland

UNVEILED: The three 'big' who wanted to take Ansu Fati