A DESIGN THAT will GIVE THAT SPEAK

Design of madness: They reveal the kit of the FC Barcelona in the 2021-22

The traditional first equipación of the FC Barcelona,​ that does not do a lot of years was used to to remain almost unalterable of a year for another, now follows changing from above down when it finalises a campaign and begins another. In these last years, however, the reality is that the Catalan club is increasing the income by sale of T-shirts in spite of the controversy generated.

During the last seasons, have been able to see designs that have generated surprise and controversial to equal parts: from the horizontal bars of the season 2015-16 to the pictures to the selection of Croatia that implanted the past campaign 2019-20. After a slight turn to the normality in the course 2020-21, the equipación of the season 2021-22 can be even more new that all the seen up to now.

Along this Tuesday in the afternoon, several Catalan media such as the 'Sportive World' or the newspaper 'Sport' have published in his digital editions the one who will be almost with all security design of the equipación of the FC Barcelona for the next season. A design that will surrender tribute to the shield of the Barcelona club and that will break with all the seen up to now.

The T-shirt will have, in all his extension, a patterned of the design of the shield of the FC Barcelona, including the Creu of Sant Jordi in the left top, the Senyera of Catalonia in the right top and the Barcelona bars of the inferior part. Of course, they will respect the Barcelona colours in all the design, including the Creu of Sant Jordi -substituting the white by the blue- and the Senyera -substituting the yellow by the blue- of the top.

Like details added, it is necessary to say that the sleeves will be granas, that the neck will be blue and that the trousers also could be of blue colour. The sponsor will be of white colour and will go back to go in the centre of the T-shirt, whereas the colour of the dorsal has not been desvelado. Details that will go clearing over time.

The imagination and originality, criticised sometimes by the barcelonistas more traditional and conservative, every time is more rewarded by his atrevimiento and transgression. It will be necessary to confirm of official form in the next months, in any case, if this T-shirt finish being really the one who luzca the FC Barcelona along the season 2021-22. 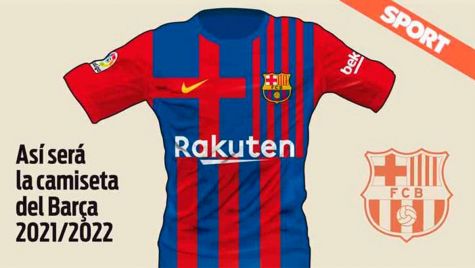 Barça officially presents its new kit for the 2020-21 season

Barça will seek to continue with the good feelings in Balaídos

THE FRENCH CANNOT HAND THE KEY

Zidane's Madrid was once again boring, predictable and very flat

VINICIUS SCORED THE GOAL OF TRIUMPH

THE CHAMPIONS LEAGUE IS COMING

The possible lineups of Celta de Vigo-FC Barcelona of LaLiga

It HEATS THE SIGNING

LAST MINUTE: Change of script in the signing of Depay by FC Barcelona

ATTENTION, BARÇA! Formidable lineup of players who could get in for free

It FINISH THE TIME

The operations that Barça could close in this last market week