THE CAMP NOU, A FORTRESS

FC Barcelona, the best local team of Europe in the last decade

FC Barcelona is the team that has achieved more victories, more goals and better results, in definite, of the old continent in his own stadium. The Camp Nou has turned into a divine sanctuary for the culés

From the season 2009-10 until the day of today, the supremacy of the FC Barcelona in the Camp Nou has him aupado in the conquest of titles of regular way, so much in LaLiga as in Champions League and Glass of Rey. The Barça, first with Guardiola and afterwards with Tito Vilanova, Gerardo Martino, Luis Enrique and Ernesto Valverde, has turned into a divine sanctuary his own stadium along the last decade.

No in vain the Barça is the best local team of Europe during this period of ten years, having harvested 252 triumphs and 945 goals in favour, very by in front of the Real Madrid (222 and 841). The fortín Barcelona has done evident with the step of the time and, coinciding with the 'was Messi', has offered big joys to the barcelonismo. The fans, by his part, has contributed enormously to the hour of 'raise' to the team in the most difficult moments.

The recent triumph in front of the Inter of Milan (2-1) in Champions League is a clear example of this. With this traced back, the Barcelona team linked in the last six years at all less than 33 parties without losing in the Estadi, the second better series like venue of the big European competition. So only it remains the Barça by behind the statistics attained by the Bayern Munich when the League of Champions still called Glass of Europe, with 43 parties invicto like venue between the years 1969 and 1991. 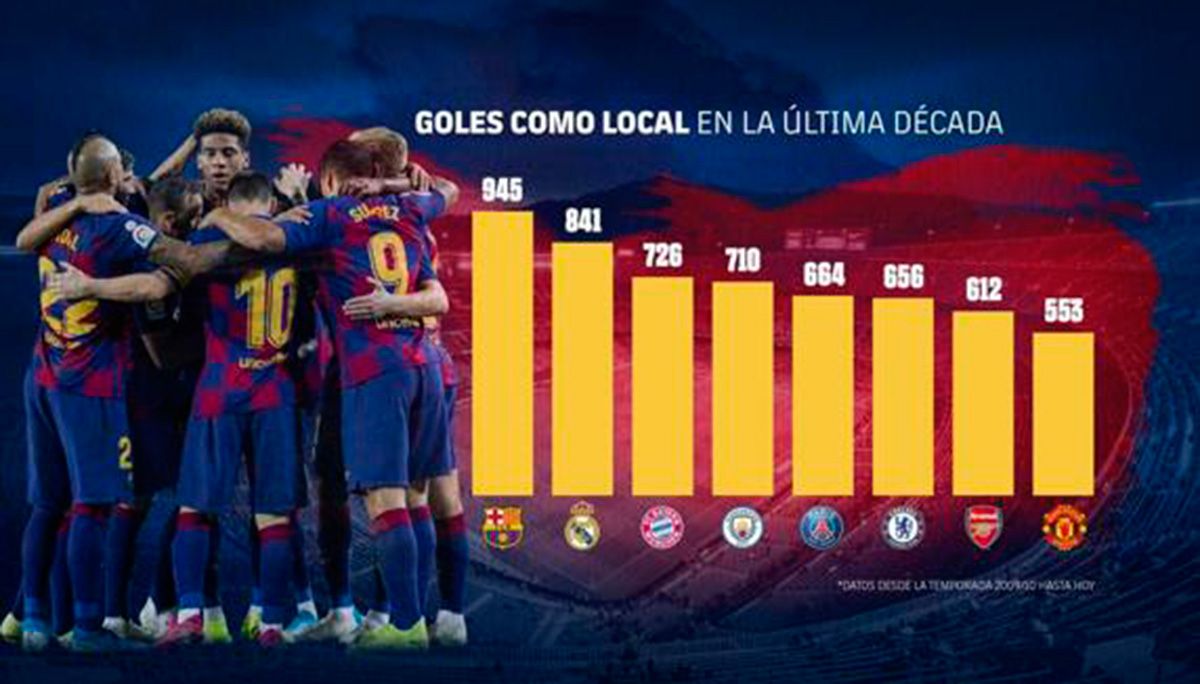 And it is that the Barça, from his last defeat in the Champions League in 2013, has marked in the Camp Nou 101 goals and received only 16, for 30 victories and three ties in the old continent. In general lines and explaining all the competitions of the last ten years, the Barcelona of Leo Messi has won 252 parties of 298 possible in the Camp Nou, empatando 32 and losing 14.

In this same period and to rebujo of the FC Barcelona, find the Real Madrid (222 triumphs in the Bernabéu) and the Manchester City (202 victories in the Etihad Stadium), teams that complete the podium and stand out his fortress home. The Barça, in any case, dominates also the facet goleadora when having annotated 945 targets in these parties, by the 841 goals of the Real Madrid and the 710 of the Manchester City.

The FC Barcelona is also the team that less parties has lost in this statistics (14), having received 206 goals against in these 298 parties. In this facet of targets against, all was said, the Barça of Valverde is increasing the negative register to the not being too fine the team culé in the last year and half, neither in the Camp Nou neither far of him.

The Barcelona has to improve far of the Camp Nou

It was as it was, the case is that the Barcelona follows keeping to the Camp Nou like a fortín and this season 2019-20 wishes that big part of his aspirations in the fight by the titles give again under the breath of his fans. Although, so that it do not happen as in the past semifinals of Champions League in front of the Liverpool (3-0 in Barcelona and 4-0 in Anfield) will do lacking to improve also the reliability far of house.

Barça reaches 33 games without losing in Champions at Camp Nou

Today highlights
BY An ELONGACIÓN IN THE BICEPS FEMORAL

OFFICIAL: Frenkie of Jong will be of drop after the injury suffered in the Classical

It will BE SUBJECTED To NEW EXAMINATIONS

The situation of Pedri begins to concern seriously to the Barça

It has been born a new hope for the Barça: The 'Kun' Agüero

They COULD EXERT LEGAL ACTIONS

Koeman Was not the only that suffered in the exit of the Camp Nou… These players also!

CHANGES IN THE LINE-UP?

The possible lineups for the FC Barcelona-Real Madrid of LaLiga

VIDEO SUMMARY: The goals and the best actions of the Barça-Madrid (1-2)

It TRAVELLED THE FAMILY MESSI

Antonela Roccuzzo Arrives to Barcelona in the weekend of the Classical