THE URUGUAYAN NO SHORT

It follows the earthquake in the FC Barcelona. It initiated with the 2-8 against the Bayern of Munich in the quarter-finals of the Champions League; it continued with the burofax of Leo Messi to the club asking the rescission of his agreement and his goodbye free; afterwards it arrived the motion of censorship with more than 20.000 signatures and, finally, a new shake of criticisms to the directive headed by Josep Maria Bartomeu after the farewell of Luis Suárez.

After the own Uruguayan forward shot against Josep Maria Bartomeu in his goodbye, went Leo Messi the one who devoted him a publication of Instagram that used also like attack to the directive: "you deserved You that you sack you like what sos: one of the most important players of the history of the club, achieving important things so much in the grupal as individually. And no that they throw you as they did it. But the truth is that, to this height, no longer surprises me at all".

The comment of Leo Messi added more firewood to the fire in a FC Barcelona that day after day leaves proofs of the existent internal war. Ex players of the FC Barcelona like Neymar or Cesc Fàbregas answered to his comment supporting his words and also to the own Luis Suárez. Others of the current staff, like Frenkie of Jong or Samuel Umtiti, also supported the critical message with his respective 'likes'.

An unforgettable career in the Barça

Of course, Luis Suárez neither could be missing in the answer to his best fellow inside the changing room of the FC Barcelona. The Uruguayan forward wrote a comment of gratitude and praise to the Argentinian, to the pair that took advantage of to give, again, another stick to the directive of the Barcelona club that chairs Josep Maria Bartomeu.

In the first place, it showed moving with Leo Messi, to the that devoted some beautiful lines. "Thank you Fellow by your words, but more thank you for being as sos, by what went from the first day with me and with your family", wrote, adding that "I will be always appreciated to Leo Messi human, to the fun and to the sentimental, because to the player all the world knows it".

To finish, Luis Suárez devoted him to Leo Messi a final praise that also interpreted like another clear 'stick' to the managerial culé: "you do not forget you what said you 'followed enjoying and showing that by something sos the one' and that 2, 3 or 4 do not blur the giant that sos for the club and for the world of the football. I want you a lot fellow and go them to extrañar to the five". It follows the war inside the club...

The answer of Luis Suárez 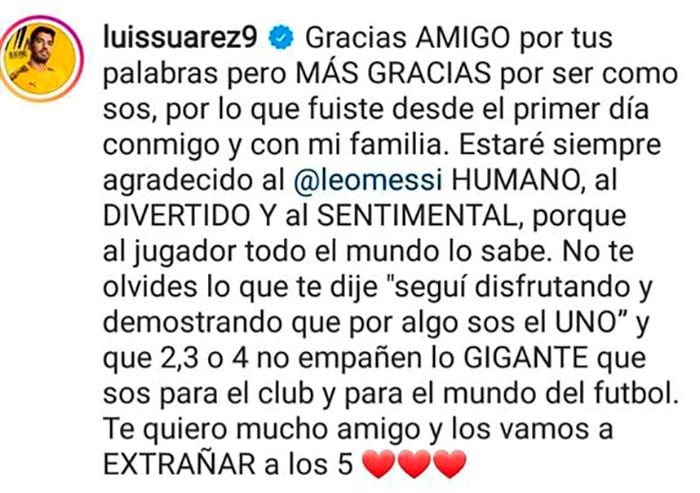 Tuesday, 20 of October of 2020 21:00h
Estadio Camp Nou
Calendar FC Barcelona
Related Content
"YOU DON'T DESERVE THAT THEY THROW YOU LIKE THIS"

Messi explodes against the Barça by Suárez: "No longer it surprises me at all..."

HIS BEST FELLOW IN THE CHANGING ROOM

The goodbye of Suárez lets to Messi 'touched' in the Barça

The possible lineups of FC Barcelona-Ferencvaros of Champions League

Ronald Koeman: "we do not think in resting people for the Clasico"

KOEMAN DROPPED THAT WILL NOT ROTATE

WORD OF THE FERENCVAROS COACH

Rebrov: "Messi is the best and I'm not going to get in what he has to improve"

The possible line-ups of the Getafe-FC Barcelona

REACTION To THE DEFEAT OF GETAFE

Koeman reveals the signing he has asked Bartomeu