The best player of the world had the opportunity to offer in front of his public the last trophy that shows his supremacy inside the world-wide football. Leo Messi went out with his fifth Balloon of Gold in front of the Athletic of Bilbao and the fans devoted him a "tifo" enormous, chord to his figure

The Camp Nou could enjoy this Sunday of the fifth Balloon of Gold of the FIFA that his forward Leo Messi received the past Monday in the gala where went back to be topped like the best player of the world. It was in the prolegómenos of the party between the FC Barcelona and the Athletic of Bilbao corresponding to the twentieth day of League BBVA 2015-2016 when the Argentinian received the affection and the admiration of his public.

It was the moment adapted also so that the barcelonismo showed him to the footballer rosarino the grateful that is by all the so much individual titles like communities that has helped to achieve since it is player of the first team. Without place to doubts few fans of the Barça (and of the balompié) will doubt that Messi is the best player of the world and of the history, seen his curriculum, records and the football that practises.

Like this then , the fans deployed a tifo giant in the lateral terracing where could read: "Enhorabona, Leo!" Together with the five Balloons of Gold that has achieved to date and the corresponding years in which it has heaved them. Beside this the figure of the player celebrating one of the goals that has done this campaign and the shield of the Barcelona group to his side.

An authentic party for the player, that wanted to photograph beside the rest of his mates and the trophy, and for the fans that received it with an ensordecedora ovation and did not stop to applaud him before initiating the party and during the same meeting. Besides, they could celebrate the first so much of the ten Barcelona after transforming a penalti clear committed by Gorka Iraizoz on Luis Suárez to the beginning of the meeting. 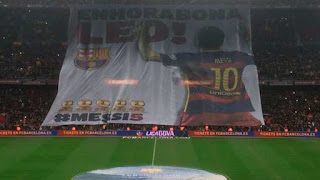 Messi offered the Balloon of Gold to the Camp Nou

Today highlights
HE AVOIDED THE QUESTIONS ABOUT BARÇA

CONFIRMED THE PLANT OF 'GIGI' TO BARÇA

IN SPITE OF NOT TO COMMUNICATE BETWEEN HIMSELF

The 'meeting' between presidents of the Barça in a restaurant

IN FRONT OF THE FAULT OF EFFECTIVENESS

STERLING, THE 'COVERED' OF LAPORTA

Joan Laporta's 'bomb' for Barça could be Sterling

DEPAY WILL BE PLAYER OF FC BARCELONA

LAPORTA DOES not FREEZE

It would ARRIVE A FORWARD OF LEVEL

Dembélé: The key for a big signing of the Barça