Neymar? For God's sake, give more opportunities to the jewels of La Masia!

While the media keeps linking the name of Neymar Jr to the FC Barcelona, a thing is clear: the Barça already has in his sufficient inferior categories talent as to aspire to a brilliant future

Sometimes, for wanting the extraneous do not know to value what have. It is a reflection already very manida and applicable to multiple moments of the life, the love or the work. It could relate also with the football, and in concrete with the situation that crosses a Barça that has empeñado from does weeks in exhausting all the possibilities that Neymar Jr go back to dress of Barcelona.

The footprint that left the Brazilian in the Barcelona went almost imborrable during his four seasons of magic in the Camp Nou. There is not doubt that it is one of the best players of the world, but also is it Kylian Mbappé... And acaso somebody knew him three years ago? Only the 'scouters' and understood in inferior categories knew that it would finish turning into one of the best players of the actuality.

Neither it knew , when Leo Messi debuted with the first team of the FC Barcelona to the 16 years, that would finish being the best player of the history of the club, and can that of this sport. They are things that never know , bets that somebody decides to do in a flash of lucidity and that transform the world of the football. This Sunday, the Barça measured to the Betis with the obligation to win after the last defeat in Saint Mamés, with the drops of his trident title. 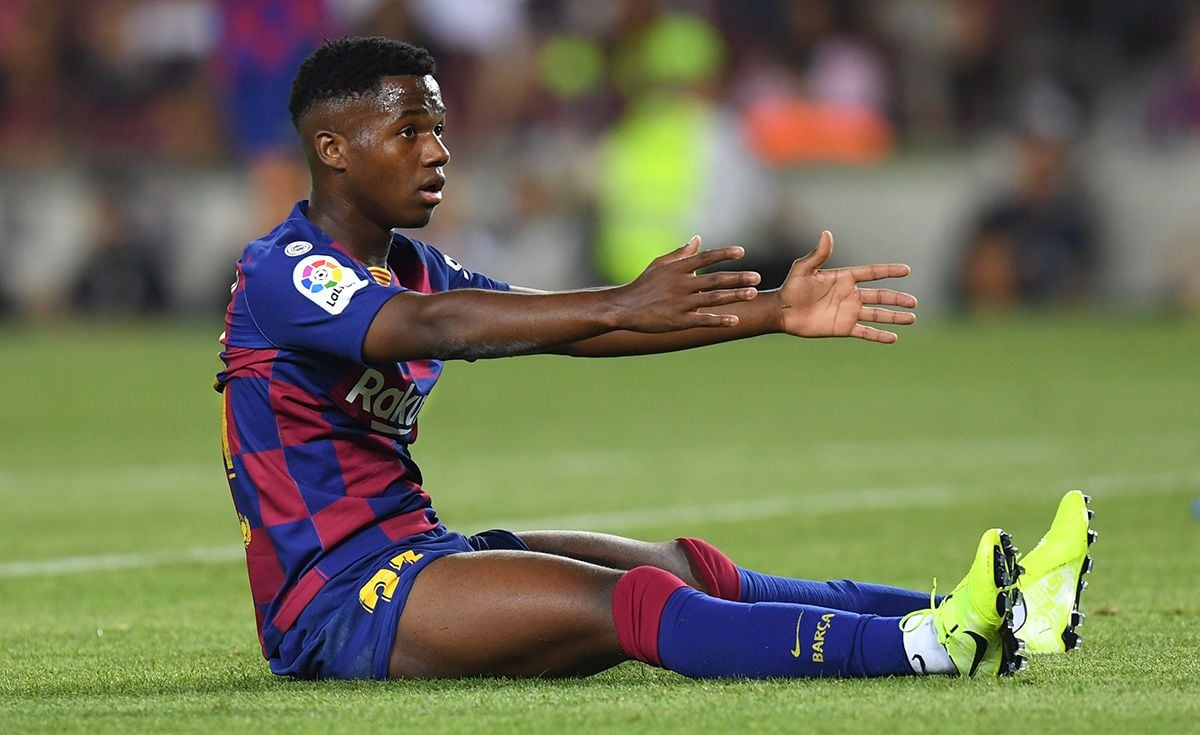 Without Messi, Suárez and Dembélé, Griezmann was the big reference up, but could not be only. Rafinha Alcántara and Carles Pérez accompanied him, two footballers formed in The Masia, and went together with the French two of the best players of the crash. Ernesto Valverde ranged to seven players of the house in front of the verdiblancos, and to fault of ten minutes for the end did to debut to Ansumane Fati, of so only 16 years.

The second younger player in debuting with the first team of the FC Barcelona, that says prompt. And the true is that the one of Guinea-Bissau did not show shy, neither much less. It tried to participate whenever it could and, when it did it, everything went out him well. Intelligent movements, desmarques, diagonals, precision in the passes, faults caused -although no him them pitaron- and until the opportunity to mark a goal that would have remembered all the life.

Ansumane Fati Caused in the Camp Nou the typical whispers of those who know that they are in front of a promise to take into account. The leading youngster convinced -more than this- and already are many those who wish to see him in more parties with the first team. This Sunday, the drops combated with bets of The Masia, and went out phenomenal. And this that were not summoned Carles Aleñá, with a brilliant future in spite of his bad party in Saint Mamés, neither a Riqui Puig that it could say that it is the player of the house that more has ilusionado to the barcelonismo in the last months.

Neither Abel Ruiz, usual in the inferior categories of the Spanish Selection and that, by progression, seemed that a priori it had more options to triumph in the Barcelona that Carles Pérez. It looks by where, results that the FC Barcelona has a quarry of gold. And it seems that we are discovering it now, when the reality is that always we have known it.

Brave decisions, Valverde: This is the way

But they do lacking brave decisions, and this Sunday Ernesto Valverde had some. Point for for him. From now on, after having taught the jewels to the barcelonismo, will be forced to be followed showing them in next appointments. It will not be easy with the accumulation of stars that there is in the staff, but always there is hollow in parties like the one of this Sunday, and in particular when the Camp Nou turns into the player number twelve.

By more than they sound Neymar Jr and other signings mediáticos for the FC Barcelona, the club has already of one of the best staff of the world and, also, with a list of young players that to day of today are finish to form in the inferior categories, but whose talent can eclosionar if they receive opportunities. Yes, we can say that this Barça ilusiona. And no only by what sees in the tip of the iceberg, but by all what there is below.

HE SHINED AGAINST BETIS

Ansu Fati, the second younger debut in LaLiga in the history of Barça

COVERED OF THE GOAL

THE REASONS OF BARÇA

The truth about Haaland and Braithwaite: Two strikers, different price

FOR A NOT PLAYED FRIENDLY MATCH

Santos demands 4,5 million euros to Barça for the signing of Neymar

HE IS ANNOYED WITH THE CLUB

New fire in PSG: Neymar talks after the defeat in Dortmund

Gerard Piqué ignites Twitter with a tremendous 'zasca' to a journalist

FORWARD OF THE LEGANÉS

The surprising favourites of Jürgen Klopp to win the Champions League

TWO FAVOURITES IN THE DIARY

POLL: Braithwaite, better than Ángel? The Barça narrows the research of a striker

THE COVERED OF BARÇA

Braithwaite, to the stage: The danish could be the '9' that Barça has chosen