HE UPLOADED A VIDEO WITH THE T-SHIRT

Spider-Man is from Barça! Tom Holland wore the culé shirt after the 'Clásico'

Tom Holland, a British actor known for playing Spider-Man in the movies in the Marvel Cinematic Universe, posed this past Sunday with the second Barça shirt in two Instagram stories

No all were bad news for the FC Barcelona after the defeat in the Classical against the Real Madrid. The Barcelona fell against the whites and added his second consecutive defeat in League, but received the support of one of the superhéroes more known of the history of the entertainment. It seems that Spider-Man is simpatizante of the group barcelonista, as it showed the actor that embodies to the character in the cinema.

Tom Holland, commissioned to give life to 'Spidey' in the Cinematographic Universe of Marvel, posed this past Sunday with the second T-shirt of the Barça in two of his histories of Instagram. The British dressed the elastic rose of the team culé in this campaign 2020/2021 during a trip in aeroplane. The actor did not have any objection in sharing this image with all his followers in this social network.

The only that knew up to now on the tastes futbolísticos of the English was that it is inflate of the Arsenal. The 'gunners' are the club that supports since it was boy and has seen him in more than an occasion dress his colours. Nevertheless, it seems that the Barça also is in a piece of his heart, as it showed with these histories that already have done virales in social networks. 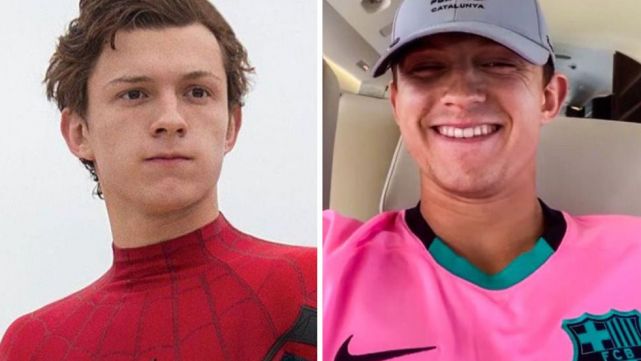 Tom Holland, Spiderman, with the T-shirt of the Barça

Spider-Man Is one of the superhéroes more known of the factory Marvel and perhaps was beside Superman and Batman the most known of the world. Along the history of the cinema until three actors have interpreted this character. The first was Tobey Maguire from the 2002 to the 2007, later Andrew Garfield took his witness of the 2012 to the 2014 and from the 2016 is Holland the one who embodies to this Man Spider.

The British has won the affection of almost all the fans of the character from his debut in 'Captain America: Civilian War' and for many is the best Spider-Man that has seen in the cinema. Now, can that to you inflate them madridistas of this superhéroe no longer do them so much grace, or that to the fans of the Barça that were not loved with him now yes are convinced of his cost.

Holland Supported to the Barça after the Classical

What seems evident is that the moment to pose with the T-shirt barcelonista has not been chosen at random. It can that the actor, fan to the football, decided after the Classical put the elastic culé in a moment complicated for all the barcelonismo. The Barça is not in a good moment and has to try replace what before. Luckily, with the fellow and neighbour Spider-Man of his side all could be easier.

A Classical with controversy

THE BRAZILIAN, TARGET OF PROVOCATIONS

Total war: Vinicius argued and got 'bitten' with half of Mallorca

A DOUBT IN THE XI

FC Barcelona-Seville: The possible line-ups for matchday 17 of LaLiga

RCD Mallorca vs Real Madrid on TV: When and where to watch the LaLiga game

THE SEVILLANS STILL IN CRISIS

Decisive duel: Barça receives a Sevilla that is still 'touched'

HE ALSO TALKED ABOUT RAPHINHA AND DEMBÉLÉ

THE ARGENTINE SPOKE WITH THE MEDIA

Messi is honest after the World Cup: "I'm going to take my memories to Barcelona"

THE BAVARIANS WANT THE '10'

Bayern accelerates in the 'race' for Ansu Fati

THE REAL MADRID WOULD ALSO BE ATTENTIVE

Royal choice? Barça would be monitoring Vlahovic at Juventus

THEY WANT TO 'STEAL' BARÇA