Éric Abidal has been protagonist this Tuesday, with several interviews in which he has analyzed the news of Barça. The french has experienced a slight tension with Leo Messi when the argentinian has answered him about the goodbye of Ernesto Valverde

Éric Abidal has been the big protagonist of the afternoon of the Tuesday, in which it has analysed the actuality of the FC Barcelona in several interviews. The technical secretary has put in front of the cameras of 'Sport' and 'Sportive World', and has given his version especially the occurred in the last months. The French has spoken of the path of the team, of high, low and even of the surprising change in the bench to half of the campaign.

In the conversation with the first of these means, the one of Saint-Genis-Laval has not bitten the tongue, and has given details of the goodbye of Ernesto Valverde: "Our department has to have the duties done because never it knows what can happen. We begin the work of the trainer during my first summer (returned to the club in June of 2018). We look for information and, afterwards, the president took the decision to renew him".

"We assume it because it was a decision of club, but already saw that the problem was not of result but it was to internal level. Never it is easy to take this decision, but after the classical of 18 December begin to concretise more in his exit", has explained, doing reference to it sucedido in this same season. Under his point of view, there were evident symptoms of a dangerous wear in the changing room.

"It does time that saw that the problem was not of result, but it was to internal level"

The Frenchman has ensured that his new position and his experience inside the terrains of game allowed him detect a dynamics that was not positive. "It looked the parties and did not look the result, but as it played , the tactics, the work of the players that did not play a lot. I fix me in these details", has signalled, and act followed has left to fall a sentence that has not seated well to the staff because it situates it in the sight.

"A lot of players were not satisfied neither worked a lot and also there was a subject of internal communication. The relation trainer-changing room always has been good, but there are things that like ex player can smell. I communicated to the club what thought and it was necessary to take a decision", has concretised, before insisting in that the bet by Quique Setién is a promising solution: "it Is DNA, illusion to work and details of players that do not play a lot and feel part of the group. The communication has to flow and this does that the team one and compete better".

That it put to the team in entredicho has not liked at all to Leo Messi, that has not taken in answering to Abidal through the social networks. The one of Rosario has shared a capture of the news of 'Sport' in his 'stories' of Instagram, and has answered that each one has to do charge of what touches him, heaving the voice to defend to his mates and leaving clear that were not the key of the dismissal of Valverde

"Sincerely, it does not like me do these things, but think that each one has to be responsible of his tasks and do charge of his decisions. The players, of what happens in the field, and besides are the first in recognising when we were not well", has signalled, recognising, as it already had done in other public appearances, that the staff is partly guilty by his problems of performance.

But even so, the captain has given a touch of attention to the French leader, underlining that the final decision took from up, and warning him that is not just to put in the focus to the cracks with an indictment that does not benefit in at all to the changing room and to the club: "The managers of the area of the sportive direction also have to assume his responsibilities and especially do charge of the decisions that take".

"Finally, I think that when it speaks of players it would be necessary to give names, because if no is us littering to all and feeding things that say and are not some", has finished the Argentinian, tired of the rumours that in the last times have aimed in his direction. This episode of tension would have to solve with an urgent talk, since the situation is not ideal in full fight by the titles. 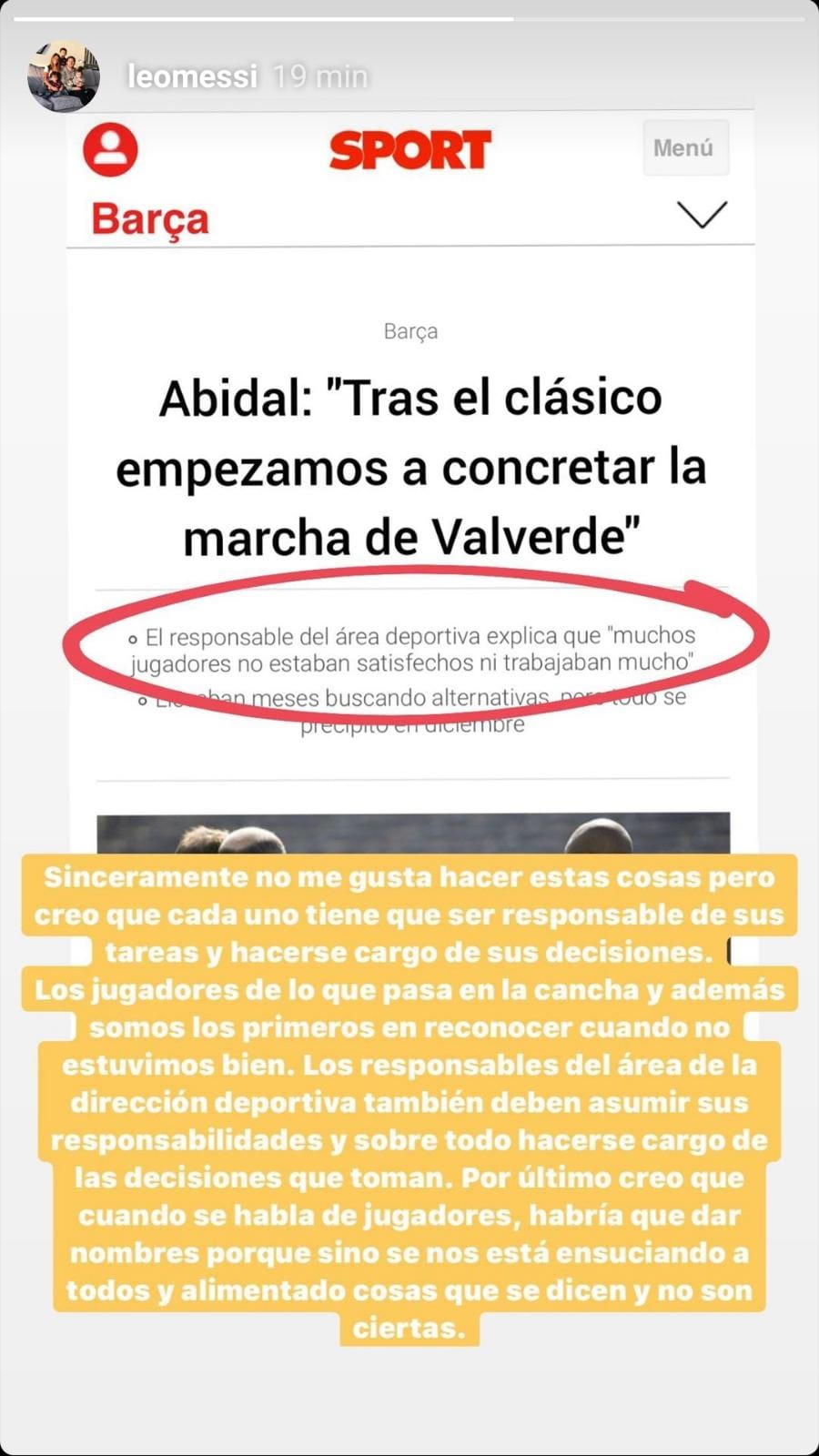 THE FRENCH IS OPTIMISTIC

FOOTBALL HAS TO BE THE FIRST

A dangerous mistake: Barça weakens itself with its own wars

Today highlights
THE REVENGE BY THE 'TAMUDAZO'

THE MERENGUES PLAY THIS FRIDAY

WAS AN EXCEPTION THE MATCH OF VILLARREAL?

One of lime and the other of sand: In the derby Barça played as bad as almost always

APPLAUDED TO THE REFEREE

Fifth descent from Espanyol and goodbye to derbies with FC Barcelona

THE PRESIDENT SPEAKS OF SIGNINGS

Millionaire losses in the Barça by fault of Nike

FC Barcelona vs Espanyol in TV: When and where see the match of LaLiga 2019-20

THE ONES OF ZIDANE, BENEFITED