After the victory of the Barcelona in front of The Palms but  with the hard news that arrived from the hospital after the injury of Messi in the head, the 'memes' on Messi have run like the gunpowder. Especially east in which Neymar "honoured" to the Argentinian failing a penal

Another party more and another alluvium of 'memes' that has left us the fifth victory in League BBVA 2015-2016 of the FC Barcelona. In this case it has chosen like the best of the party one that seems hit since resume it sucedido in the terrain of game. And it is that although the Barcelona won to the Canarians 2-1, the head of a lot of players and fans were in the hospital where made him the proofs to Leo Messi after his injury.

And in these theF C Barcelona found with a penalti in favour and without the Argentinian on the lawn to launch it. Neymar Júnior Was decided to do it treating to break with the bad series blaugrana. This or wanting to "honour" to the Argentinian and sending him the spherical to his hospitable centre, seeing the final result.

The reirse on one same after a victory always knows well, although in this occasion have the aftertaste of the injury of the best player of the world. So that the culés happen better this drink in the party of this Sunday there is double session of meme. Enjoy it. 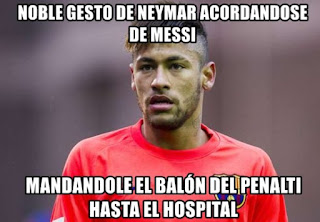 The Barca, near to recover to a key piece for the front of attack!

BY An ELONGACIÓN IN THE BICEPS FEMORAL

OFFICIAL: Frenkie of Jong will be of drop after the injury suffered in the Classical

It has been born a new hope for the Barça: The 'Kun' Agüero

Koeman Was not the only that suffered in the exit of the Camp Nou… These players also!

SELF-CRITICISM AFTER THE GOLEADA

CHANGES IN THE LINE-UP?

The possible lineups for the FC Barcelona-Real Madrid of LaLiga

VIDEO SUMMARY: The goals and the best actions of the Barça-Madrid (1-2)

It TRAVELLED THE FAMILY MESSI

Antonela Roccuzzo Arrives to Barcelona in the weekend of the Classical