FCBN interviews to Jordi Farré: "Neymar? His father has spoken us to come back home"

One of the precandidates to the elections of the FC Barcelona, Jordi Farré, attended in the last hours to 'FCBN', analysed the actuality culé and spoke about his plans of future for the Barcelona club

Jordi Farré walked very busy, during the previous hours to the delivery of signatures of this Monday 11 January, when it attended to the call of 'FCBN' to deepen even more in the keys of his project, analyse the current situation of the club and speak, also, on some proper names that are used to to hoard the attention of the barcelonismo in the last times. The pandemia, as it is logical, conditions it everything.

Answer: As has bad paints. And if they cancel the elections, repeat of zero. For all the world would be a big problem...

R: No, big impulsores no. The impulsor.

R: It was happy, but neither celebrate at all, because at the end there was not at all that celebrate. It was a good day for the Barça, but when it does a thing of these is because they were doing it very bad and was not a reason of joy. We were happy because that it was positive for the Barça, but at all more.

R: As fatal... I think that would have to have summoned elections immediately. And it did not do , I do not know why. And it delayed the collected of signatures to the Christmass, when they knew that we went to be worse in the pandemia. I do not know why they did not summon the elections the first day.

R: I think that these elections have to be to speak of the project, of the people that go it to manage, and of the team. But speak of names, when anybody knows at all, right now does not suit.

R: It went out the name of Neymar because I do not know who filtered it, and the truth is that yes that were speaking with his surroundings, with his father, but as we speak with tantísima people... And afterwards they asked me if it liked me or it did not like me, and I said that when they happened the signatures and presented to the sportive director, that asked it to him to him, that is the one who has to value it (laughs).

R: I think that there would be problem to economic level, because in the last year of a player can ask to the FIFA the 'transfer request'.

R: It looks, you know what says you the father of Neymar? That his son already has won a lot of money and that what wants to is to have a good time. Likewise it was. It said me: "In this put us of agreement in half hour".

R: Claro... And the father, when it speaks of his son, says 'go back home'. The people goes back home where is well. In fact, have a lot of doubts of if it was not a traspaso, know? The clause the PSG would have to have it deposited in LaLiga, no to the Barça in a cheque. A cheque in the Barça is a traspaso. And LaLiga... You do not agree you that it did not want to take the cheque? As here you have it.

R: I think that does not do lacking to convince him a lot... What has to go back is the joy to the entity. And already it has more than of leftovers with this to take the decision.

R: The Saturday hit a partidazo. I the truth that think that Leo is happy with Koeman. And by what says the people and this... I think that the only that it wants to is that there is a good staff for next year. But it is that listen me a thing, analyse the staff of the Barça and have a just team of effective, but there is not bad staff. There is not bad team.

R: Of course. I think that there are players very young... Fault perhaps a side, a central and a leading centre, and with this and the quarry go sobrados.

R: It is that it is of crazy, because to Eric García offered him €400.000 the Manchester City. The Barça offered him €300.000, or was that by €100.000 to the year did not renew. And afterwards they say you that the parents are peseteros, but they logically want the best for his children, as they want to all the parents of the world. Besides they offered him the commitment to play with the first team, the commitment to play the English Glass... With which, the Barça did not offer this commitment to Xavi Simons, to Eric... Later it begins to fichar to players that does not know them anybody, by 4, 5 or 6 millions, and besides pay them €400.000 to the year that is what did not want to pay by the canteranos. I no explain it to me, the truth. 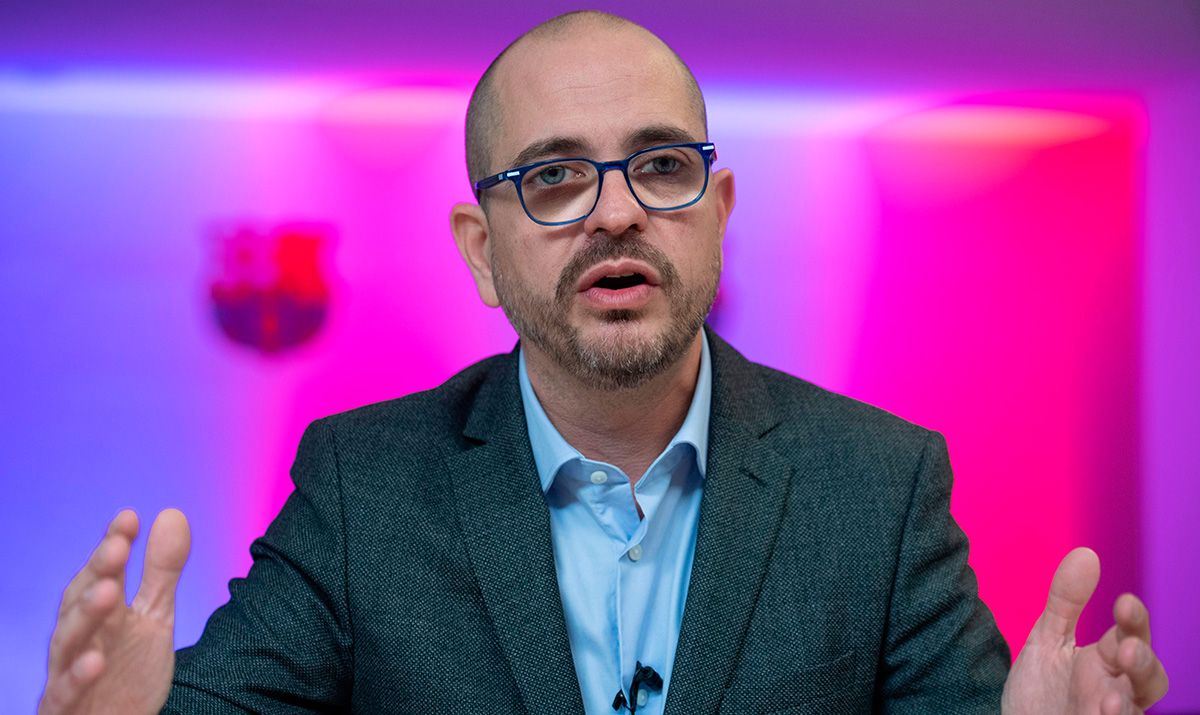 Jordi Farré, one of the precandidatos to the elections of the Barça

R: I want to think that no. I expect that no, already I say you.

R: For the time being yes, beyond all doubt. I do not think that can go in in the club with an excavator. Koeman Is not the cause of the evils of the Barça. And besides it is brave with the young boys.

R: It looks, we are those that are new for real, people between 40-50 years... All employers, that besides have mounted us the companies we same, has gone us well and do not come of the big families neither of the 'lobbies' of the 'establishment'. No, at all of this.

R: I think that the economic problem of the Barça is in the short term. To half and long, do not see the problem. It has to refinanciar all the debt of short, happen it to long, begin the Espai Barça of immediate form in format of granting, that happen us a 'fee' of 100 'kilos' and... Well, it is to change the model of Goldman Sachs by a credit of granting. And this is viable, because in fact already there are two companies that have showed interest in putting money like this. With a profitability of the 4 or 5% that take them out the granting, the big business groups go back crazy. The Barça is one of the big marks of the world, do not forget it.

R: The Masia was the central axis. We would have done that the sportive director was the manager of the first team until the alevines, and afterwards of course that had to people underneath that it structured it. But the sportive director has to be the big manager, and is the one who has to know all the quarry since they are alevines or childish, and that when it was necessary to manufacture to a side bet by a side. The Barça has worked when The Masia has worked, and it is necessary to invest in her. It can not have more cases of Eric García, Xavi Simons...

R: I for the time being, to fix the sportive subject, would not sell to big active. I am of the mythical sentence of "the money in the field and no in the bank". The Barça is not a club seller, although we have to begin to know sell. Because all the players that manufacture can not play in the Barça, but yes can be sold, and in this the Real Madrid takes us out a terrible advantage.

R: And afterwards the Barça leaves to go almost free to Grimaldo, Muniesa, Cucurella... I think that Cucurella would owe to be in the Barça himself or yes.

R: Well, it is that Miranda think that is a piece of player. And instead, here no they gave him the opportunities.

R: The VAR think that is a wonderful tool, but badly applied, where there is not a clear regulation. Each one applies it as it wants to. Instead of referees in the VAR, I would put to uncles that anybody knew who are, that had a technical criterion and no mediático. I think that it is very bad mounted, and looks that it is a tool potentísima.

R: Well, it is that the last parties of the past League and the first of this season, have been a scandal. At the end the hands are hands, and that those famous hands of Sergio Bouquets did not go penalti, went a scandal. And that afterwards pitara the penalti of Lenglet in the Classical... This are subjective criteria and that always go for the same side. It surprises me...

R: The surveys? The day 24, in the esplanade of the Camp Nou will see (laughs). To do a survey for real, estadísticamente, would have to do it like minimum with 1.500 partners. With 200 I think that is not a sufficiently representative sample to obtain a real result. It looks, if it is that the best survey are the urns. The surveys only serve to advance the illusion or the disappointment.

R: It thinks that to the people does not like him lose. And I think so can influence the surveys.

R: I think that the action was brilliant regarding tool of marketing. Now, with a lot of money is much easier to do this campaign. It is a bit what wanted to do with the pizzas and the tattoos, have repercussion mediática, of impact.

R: Sacks of rice for beneficiencia, for charity. To me give charity does not like me. Caridad or cooperation have to do it without publicitarla. I do enough in my company, and have not done any advertising action with her.

R: It has been a pleasure. Thanks to you. Ciao!

It THINKS THAT MESSI will REMAIN

Jordi Farré: "Messi and Neymar would play together at Barça next year"

It PRESENTED HIS ELECTORAL PROGRAM

Jordi Farré charges Joan Laporta for his banner in Madrid

The Barça already knows the astronomical wage that asks Haaland

THE CHANGES OF THE GERMAN

From Calderón to La Cartuja: Ter Stegen's path since his last Cup final

THE BATTLE THAT 'WIN' THE MERENGUES

The factor 'extra' of the Real Madrid that the Barcelona envies

It CARRIES TWO IN TOTAL

Koeman is going for a new final! He already knows what it is to win the Cup

PIQUÉ IS GOING TO FORCE

The nightmare does not end: Gerard Piqué continues with discomfort

The signings that plans Laporta to restructure to the Barcelona

The time that had to add Gil Manzano in the Classical, as 'The Golazo of Goal'

ANOTHER WINK FROM PARIS

Barça's plan to 'tie' Haaland and the '9' rejects Madrid