The police of Manchester "mofa" of Wayne Rooney

The police of Manchester "mofa" of Wayne Rooney

The Body of Police of Manchester went up and posteriomente erased a tuit to his personal account cachondeándose of the forward of the United. The event did not happen unobserved for anybody and a capture of the moment has raised a strong controversial in the English city

Everything aims to that the attendant to manage the profile of Twitter of the Body of Police of the English city of Manchester is not very "network devil". His last tuit rather leaves entreveer all the contrary, after mofarse of the penalidades of the forward of the United Wayne Rooney in his last party. And although east would finish erased almost to the instant, the users of the social network were faster to leave proof of the fact.

In the tuit the police tricks of the current moment of form by which is happening the ten of MANU. Rooney, that only has marked two goals this campaign, is treated by the tuitero police like "unobserved" and prays to the citizens that help to find it. "It has seen him for the last time in Old Trafford with a red T-shirt. If somebody has seen him, please inform to the police?, they detailed.

The forward saw door in the last victory of his team does three days. The Manchester won then by zero goals to three to the Everton. But a series aciada in the following two parties would leave to the ones of Louis go Gaal without marking, empatando in front of Manchester City and Cristal Palace and remaining already to four points of his rivals of city, that already are leaders of the Premier. 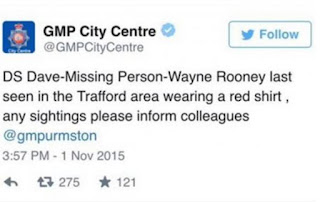 BARÇA MAY 'FISH' AT ANFIELD

SER: Leo Messi will not renew and wants to leave Barça in 2021!

Pjanic celebrates, with tears, his signing for the Barça with family and friends

The interesting barter that Arsenal could propose to sign Griezmann