The suffered victory of the FC Barcelona this Saturday in The Palms also carries achieve a good number of "memes" to enjoy of the three points of the cules, and the important difference with his perseguidores in League BBVA. Luis Suárez, leading of these

The FC Barcelona of Luis Enrique won this Saturday in front of the UD The Palms and added three important points of face to the achievement of the title of League BBVA 2015-2016. Although it was not the best meetings of the blaugranas, Luis Suárez went back to wet, adding already 25 so many. Something that, for the users of internet, has a secret: hit him "bitten" to the ball.

After this semantic wit, the number of goals of the charrúa in the cometición liguera also has given for another "meme". And it is that the one of Jump already carries a goal more than all those that has achieved the Canarian team this season in the domestic competition, as to date and with the so much that added in front of the culés, carry 24, by the 25 of the nine culé.

Finally, and although they did not contest any minute of the party, Munir the Haddadi and Sandro Ramírez also received by part of the fans. And it is that, as it affirms in the last "meme", the forward of The Palms William José quinduplica to the two canteranos Barcelona. 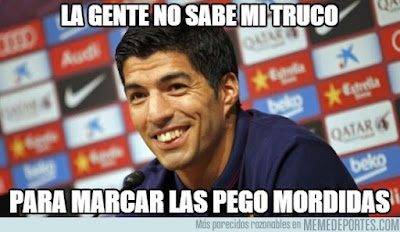 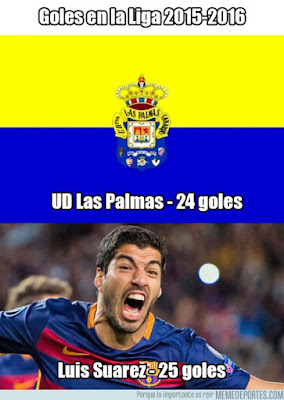 Tebas: "We consider that LaLiga can return on 29th May or 6th June"

RUMOURS ABOUT THE INTER

Tebas: "If Messi goes to Italy neither would be a drama"

FIGHT FOR THE STARS

The Real Madrid takes a decision with Cristiano Ronaldo

Iniesta pronounces about a possible return to the FC Barcelona

NEW DETAILS ABOUT THE OPERATION

Barça players whom Inter do not want in the 'Lautaro operation'

FOLLOW-UP TO THE EREDIVISIE

The three Dutch youths as plan 'B' from Barça to Lautaro

THIRD CASE IN THE CLUB

The 5 'galactic' signings that Barça are contemplating this summer