SHE SPOKEN ON SOCIAL NETWORKS

Frenkie de Jong's girlfriend 'passes' the discomfort with the Dutchman

Frenkie de Jong's girlfriend, Mikky Kiemeney, has used her 'stories' on 'Instagram' to send a message to all those who have been dissatisfied with the current affairs of her partner

The future of Frenkie of Jong has been in the 'limbo' from does several months because of the economic situation of the FC Barcelona. So much Joan Laporta like Xavi Hernández want that the Dutch continue in the team, but for this the club needs to do a considerable discount in his wage that allow them inscribe to the new incorporations before the debut suspender belt of this Saturday in front of the Ray Vallecano.

However, the midfield player still has not accepted to reduce his emolumentos, what has created a big unrest between the fans culés. This Wednesday several images and videos spread by the media desvelaron like some inflate Barcelona received with insults to the player, just when ingresaba in vehicle to the installations of the Sportive City Joan Gamper.

With this on the table, the girlfriend of Frenkie, Mikky Kiemeney, has pronounced in his social networks with a message that could be headed to all those people that have showed his enojo with the actuality of the mediocentro. Through his 'stories' in 'Instagram', the model commented: "And in the meantime... Living ours better life", in a 'post' in which it appears driving beside his couple and making several activities in the beach.

This is a reflection that so much she as Of Jong are happy in Barcelona and that are entirely acclimated to his lifestyle. Already the '21' has left clear in distinct opportunities that his wish is to triumph in the club and that his first option always will be to dress of blaugrana. For the moment, the sportive direction is in negotiations with Chelsea to sell him in case that it do not accept the requirements of the institution. Everything is on the table. 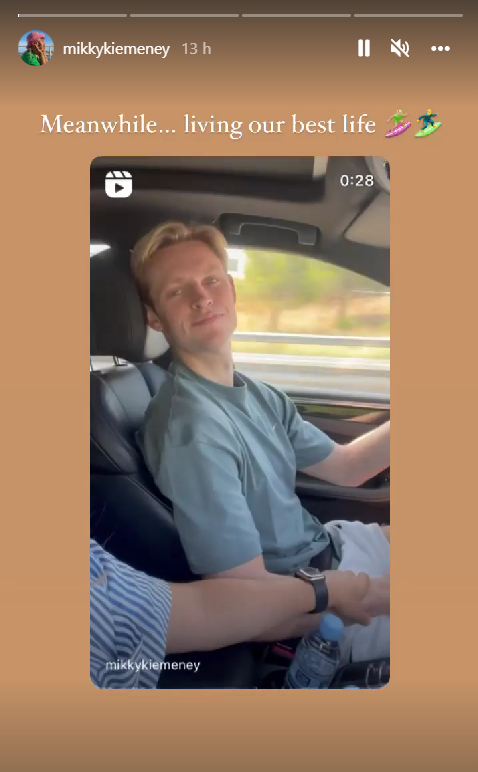 Mikky Kiemeney And Frenkie of Jong

The representative of Frenkie landed in Catalonia to gather directly with the executives of the Barça to resolve the situation once and for all. The player has a valid agreement and his posture is the one of not going out neither neither reduce the wage, since it did an effort in 2020 to help to solve the crisis by the pandemia. The tension reigns in the offices of the Spotify Camp Nou in the meantime he like his couple abstraen with his activities.

THE VAR, AGAINST THE BARÇA IN MILAN

Barca robbery! Two penalties not awarded and one goal disallowed against Inter

POOR GAME OF THE CULÉS

Barça's 1x1 in the controversial defeat against Inter

THE DECISIONS OF THE VAR, KEYS

Xavi cries out against the referee: "I'm very pissed off, it's an injustice"

ANDREAS FELT DISCOMFORT IN HIS ANKLE

Christensen alert! The Dane had to withdraw injured

THE '9' IS ENCANTADÓ WITH THE MÍSTER

Expulsion at Barça and possible loss for the Clásico!

WILL XAVI CHANGE SOMETHING?

The possible line-ups of the Inter-FC Barcelona Champions League

HE IS BEING A PROTAGONIST IN THE GIRONA

Arnau Martínez, the perfect full-back for Barça that Xavi wants

THE ARGENTINE WOULD NOT RENEW WITH PSG

'Bombshell'! A journalist from Messi's environment announces his signing for Barça