THEY CAN'T STOP HIM

The Leganés tried to brake to Leo Messi of all the possible ways. One of them was a commented tackle of Bustinza, that has turned into meat of 'memes' in the social media

The social networks did not take in doing echo, to his way and with the originality by flag, of the placaje of Bustinza to Leo Messi during the FC Barcelona-Leganés of this Tuesday in the Camp Nou. The Basque defender of the group 'pepinero' could not brake to the Argentinian star, and when it left him by speed after a 'dribbling' did not doubt in launching to hold him, as if of a party of rugby treated .

It won the yellow cardboard, of course, and later excused with Leo Messi. The question is that the image did not take at all in viralizarse through the social networks, with full photographic settings of humour and the security that, in spite of his almost 33 years -will fulfil them in a week-, the '10' of the FC Barcelona continues being imparable.

One of the most fun sentences, although with dyes of reality, is the one who published the account of Twitter @HoyEnDeportes4: "The fans of the Barça the day that Messi announce his withdrawal", wrote, adding the image without retouching in which Bustinza placaba to Messi without miramientos.

Other users opted by 'dress' to Bustinza with an equipment of rugby, although no only proliferated the 'memes' of this concrete action but also others that encumbraban directly to the Argentinian, doing notice his superiority during the party. 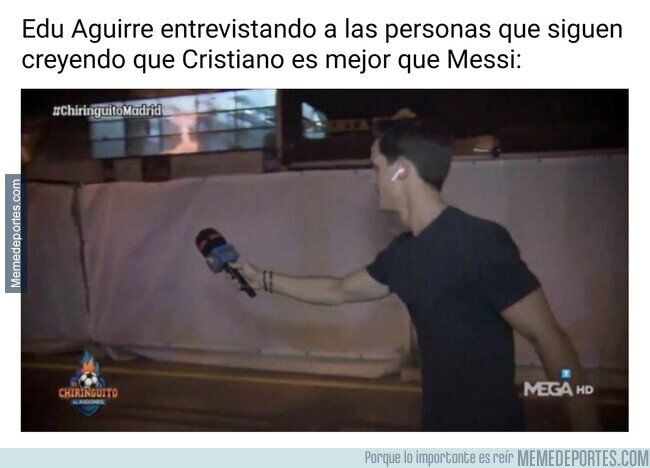 Edu Aguirre, interviewing to the air

It runs by the social networks a hanged image by 'Memedeportes' in which it can see to Edu Aguirre, known reporter of 'The Chiringuito' and fellow intimate of Cristiano Ronaldo, interviewing to the air with a microphone under the following premise: "Edu Aguirre interviewing to the people that follow thinking that Christian is better that Messi".

In each party there is an anecdote

It remains clear, in definite, that although it have split more boring that others, almost always finds some anecdote to which take out tip to generate 'memes' and humour through the social networks. In the Mallorca-Barça already occurred with the spontaneous that jumped to the field, and this Tuesday with the placaje of Bustinza to Messi in the Barça-Leganés. Which surprise will offer us the party in front of the Seville in the Sánchez Pizjuán?

The fans of the Barça the day that Messi announce his withdrawal. pic.twitter.com/zkcibevnro

The turn of the football prevents it to me https://t.co/9g7brvxuux pic.twitter.com/wve8rufhms

It is not football. It is the Super Bowl https://t.co/6mlfb1gh1x

WHEN MESSI SPEAKS, EVERYONE SHUT UP

HE SENTENCED AGAINST THE LEGANÉS

Messi cooked it and ate it: Penalti for the tranquility of the Barça

Diego Carlos only thinks about Barça: "Messi is coming? Everyone is coming"

Today highlights
"WE BELIEVE IN THIS PROJECT"

"Always together": Ronald Araújo's message that excites all Barcelona fans

HE WILL LEAVE AS A FREE AGENT

ACCORDING TO REPORTS 'L'EQUIPE'

No turning back: Mbappé puts the 'for sale' sign on Neymar Jr

NO NERVES BEFORE THE FINAL

HE DOESN'T WANT THEM TO TALK ABOUT HIM

THE CLUB IS NO LONGER CONSIDERING HIS DEPARTURE

ACCORDING TO THE 'ONZE' OF 'ESPORT3'

The two 'jewels' of Barça with which Xavi would be 'frustrated'

THE PRESIDENT, TOUGH ON PSG