RATS OF CLOTH IN HIS PLATE

Rats of cloth, rain of whistles and chants of "Griezmann die"

As it was to expect, the return to the Wanda Metropolitan of Antoine Griezmann was more than hostile. The French received insults and a rain of whistles every time that he touched the ball

Probably already it expected it to him, but a thing is to imagine it and another live it. Antoine Griezmann was whistled of unanimous form during the ninety minutes in Wanda Metropolitan. The fans 'colchonera' has more recent in the memory the turbulent exit of the French the past summer, and seems to put this by in front of the five brilliant seasons of the footballer with the T-shirt rojiblanca.

The case is that a rain of wind pursued to Griezmann every time that touched the balloon this Sunday in the sanctuary 'colchonero', without explaining the grave insults that received in concrete moments. "Griezmann, die you" was one of them, as they have aimed in the last hours several Spanish means. 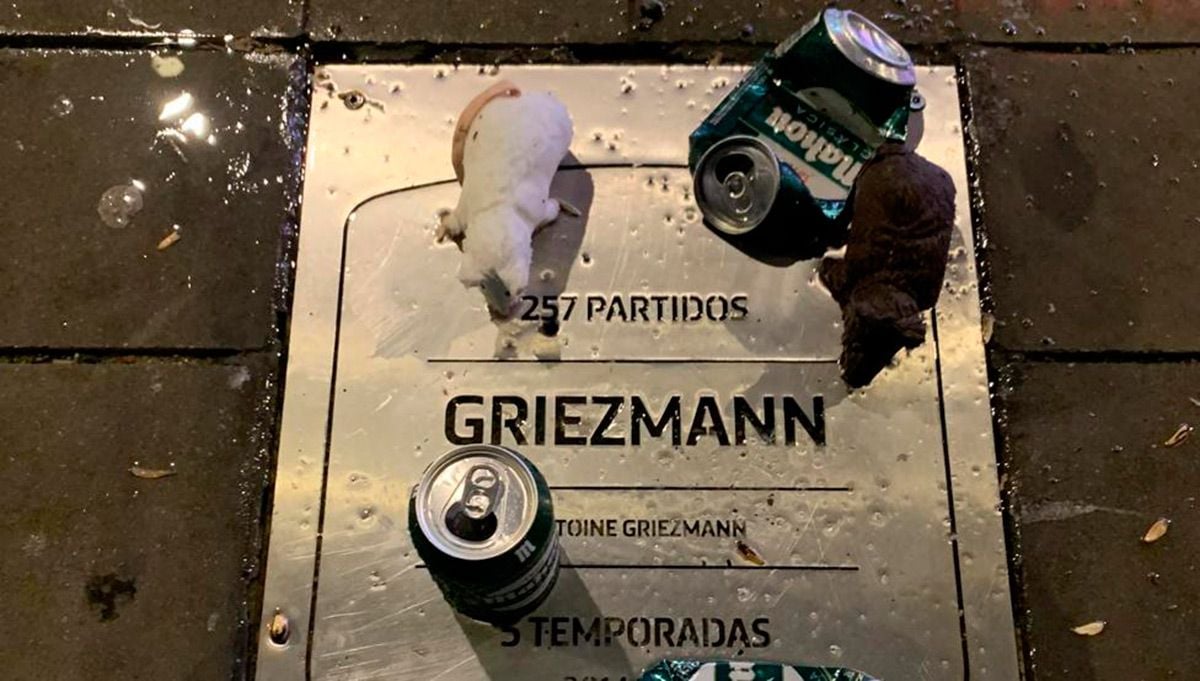 Like this lució the plate of Griezmann before the Athletic-Barça

But before the balloon threw to film, already had clear die indications of by where would go the shots. And it is that the memorial plate of Antoine Griezman in Wanda Metropolitan, that the operarios of the club had cleaned in the previous days to the party, went back to remain full of tachones, rubbish and rats of cloth, in a clear message for the French.

Griezmann No longer is welcome to the Spanish capital. The fans of the Athletic of Madrid do not want to him see neither in painting, and is clear that the ones of the Real Madrid -although they respect him- neither have him too much esteem. Perhaps it went by the whistles or the nerves, or perhaps no, but the case is that Antoine Griezmann was not comfortable in any moment this Sunday in Wanda.

Griezmann, at all comfortable in Wanda Metropolitan

Neither he neither the rest of the FC Barcelona, that received a continuous siege during the first-half and saved thanks to Ter Stegen. In the second time improved the image and had more control of the game, although Griezmann kept on being the piece more prescindible of the trident formed with Leo Messi and Luis Suárez.

Although the marked goal against the Borussia Dortmund served to recess the tension that cierne around him in the Camp Nou, the true is that to 'Grizi' still is missing him to finish to adapt to the ecosystem culé. When it do it, has the quality and the sufficient talent as to turn into a very important footballer. Until this suceda, will touch to expect...

RODRIGO CONTINUES TO BE 1st OPTION

Setién gives his players free Monday after the Mestalla defeat

HE COMPLETED A PART OF THE TRAINING

Barça's bomb: Lautaro could be 'culé' before the market closes

Valencia vs FC Barcelona in TV: When and where see the match of LaLiga 2019-20

This is the Barça negotiations by Rodrigo Moreno