Luis Suárez's reaction to the defeat of FC Barcelona against Atlético

In spite of his Barcelona past, Luis Suárez did not doubt in celebrating the victory of the Athletic of Madrid in front of the FC Barcelona in the social networks

This Saturday, the Athletic of Madrid gave an important moral hit to the FC Barcelona with a victory (1-0) in Wanda Metropolitan that approaches to the 'colchoneros' to the fight by LaLiga Santander​ whereas it moves away to the Barcelona of the places that give access to the next edition of the Champions League. A party that decided by a goal of Yannick Carrasco in the final stretch of the first time.

The duel between the Athletic of Madrid and the FC Barcelona had several drops by part of both groups and, in concrete for the rojiblancos, the most remarkable was the one of Luis Suárez. The Uruguayan forward went back of the international stop of selections giving positive by Covid-19, reason by which could not reencontrarse with which went his team during the six previous seasons.

In spite of this remarkable absence, the Athletic of Madrid achieved sobreponerse and obtain the three points, something that caused the joy of the 'gunman'. After the party, Luis Suárez did not doubt in celebrating by his social networks the victory of the group rojiblanco or, what is the same, the defeat of the FC Barcelona in a moment frankly delicate for the entity so much to sportive level like institutional.

Precisely by these difficulties that crosses the Barcelona team surprised that Luis Suárez, after the party, published a post in 'Stories of Instagram' celebrating the victory as if it treated of a more. "Big team +3", published, beside several emoticonos of applause , other so many of strength and others showing the colours rojiblancos with a photography of background team.

A publication that could have saved. It is clear that each one is free to celebrate the victories of the form that want to and Luis Suárez did not be to the respect in his publication. But, taking into account the delicate moment that lives the FC Barcelona and that the Uruguayan was the one who went in the Camp Nou, maybe was unsuitable that restregase the victory with a publication that possibly was full of resentment.

The FC Barcelona lost, in a party in which Gerard Hammered and Sergi Roberto lesionaron, in the case of the central possibly of gravity. To Luis Suárez gave him the same. For him, the important was that all the world saw the 'colchonero' that feels two months after having signed his new agreement. A gesture that is not to the height of a historical player for the barcelonismo, that also was the one who was thanks to the club culé.

The publication of Luis Suárez 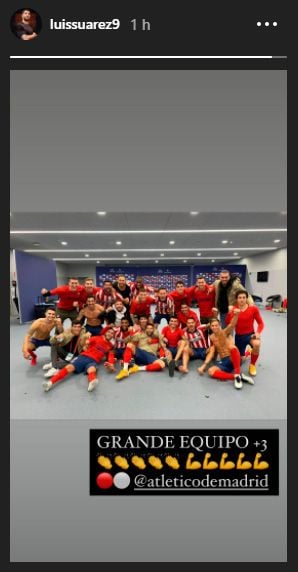 Luis Suárez celebrates the defeat of the FC Barcelona

Alert of gravity: Gerard Piqué withdrew between tears and with a worrisome injury

VIDEO SUMMARY: The goal and the best replays of the Atlético-Barça (1-0)

Today highlights
FONT WAS THE ONLY WHO WANTED ERIC

DUTCH WOULD HAVE MADE HIS DECISION

Wijnaldum, increasingly away from Liverpool and closer to Barça

To BY THE TITLE!

MESSI IS THE ONLY DOUBT

BARÇA WANTS TO GET RID OF MATHEUS

Alavés asks Barça about the loan of Matheus Fernandes

It LIVED THE SEMIFINALS FROM THE TERRACING

Worrying images of Leo Messi during the Super Cup

NEUER, CHOSEN BEST OF THE DECADE

LAUGHING: Ter Stegen, behind Keylor or Courtois as the best goalkeeper of the decade

Will he achieve it? Messi wants the second place in the ranking of titles

Bartomeu breaks his silence! Conclusive message of the ex president

KEY MEETING IN THE BARCELONA