AN AUTHENTIC 'VIA CRUCIS'

X-ray: The nine muscular injuries of Dembélé in the FC Barcelona

Ousmane Dembélé seems unable to have regularity in the FC Barcelona because of the injuries. Since he landed in the Camp Nou, has suffered nine muscular problems of importance

The bad luck is cebando with Ousmane Dembélé since fichó by the FC Barcelona. Or really there is something more? It was as it was, it is not normal that in little more than two years the attacker youngster French, that so only has 22 years, have suffered at all less than nine muscular injuries of some importance with the Barcelona T-shirt, when neither in the Rennes neither in the Borussia Dortmund fell lesionado.

This past Wednesday had to be substituted in the minute 25 of party by Antoine Griezmann, with 0-0 in the marker and complaining ostensiblemente of pain in the left foot, afterwards have fallen in bad position when it tried to finish a centre of Sergi Roberto. Already it is the third injury of Dembélé in what it goes of season, and from here that the player abandoned the visibly affected field.

Part of the public of the Camp Nou whistled him, when understanding that already it has had sufficient patience with the Frenchman. For the moment, in the changing room subjected him to some first proofs that indicated that it suffers a muscular injury in the right thigh, waiting for more examinations that will reveal the exact time of drop. To continuation, from 'FCBN' have wanted to analyse the nine injuries that has suffered Dembélé up to now in CanBarça : 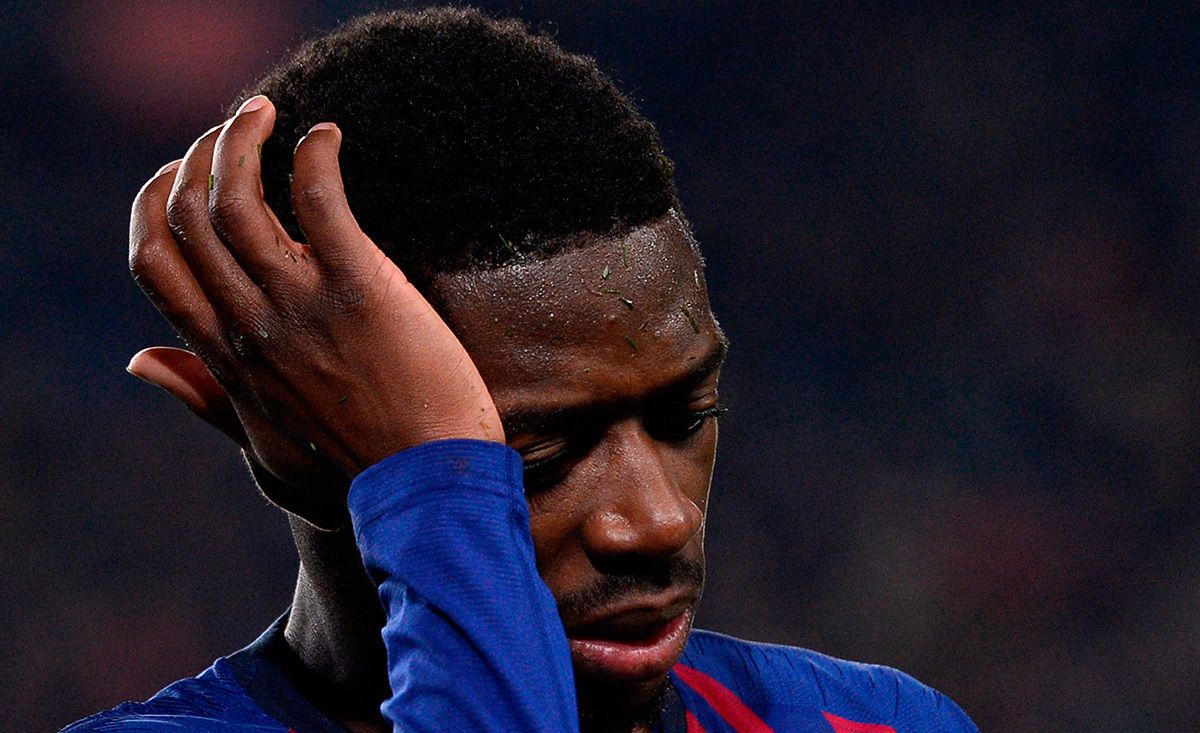 The first of them, and the gravest ofall , arrived in a Getafe-Barça contested on 17 September 2017. Hardly it did a month and half since Dembélé had landed in the club, and already suffered his first reverse. The muscular break in the biceps femoral of the left leg forced him to remain at all less than four months of drop, a serious setback for Valverde after having lost to Neymar Jr some months before.

Once recovered, Dembélé went back to fall lesionado on 15 January 2018 in front of the Real Sociedad. This time the problem was a break fibrilar in the semitendinoso of the left thigh, that forced him to lose a month more than competition and leave to the Barça again 'touched', although the culés followed winning split with solvency and did not have rival neither in LaLiga Santander neither in the Glass of Rey.

Some months later, also against to the Real Sociedad but this time in the Camp Nou, Dembélé suffered on 20 May 2018 a slight sprain in the right ankle, that forced him to remain a week between cottons. Afterwards they arrived some months of tranquility, and at the beginning of the season 2018-19 Dembélé began to lucir his best game since it arrived to the team.

A 2019 black for Ousmane Dembélé

On 20 January 2019, however, new setback. 'Dembouz' Suffered a sprain in the left ankle against the Leganés in Butarque, that forced him to remain three weeks more than drop. The fifth injury gave on 14 March 2019, a muscular break in the biceps femoral of the left leg and, again, a month separated of the terrains of game.

And it is that this year 2019 it is being all a 'via crucis' for the attacker youngster French. On 4 May 2019, against the Celtic of Vigo in Balaídos, went back to suffer a break fibrilar in the biceps femoral of the right leg, remaining a month and gave without playing and losing like this what remained of season.

The campaign 2019-20 did not begin well neither for the Frenchman. Muscular break in the biceps femoral of the left leg on 19 August 2019, in the first day of LaLiga against the Athletic of Bilbao, and five weeks more without being able to have his services.

It went back to fall lesionado Dembélé in the Getafe-Barça of the past 28 September, remaining again a month without playing by fault of one overloads in the isquiotibiales of the left leg. And, already finally, it has arrived the setback of this past Wednesday 27 November in front of the Borussia Dortmund, that will do him be at all less than 10 weeks ofdrop .

The injuries of Dembélé concern to the Barça

Nine injuries in little more than two years for a footballer that cost 105 million euros more 40 'kilos' in concept of variables, and that although it has showed his quality and talent in sobradas occasions, follows without obtaining the necessary regularity to triumph in the FC Barcelona. It will achieve to leave backwards the bad series of injuries that accumulates? Seen the seen, to day of today seems difficult... And it is one very bad signal for somebody of his age.

This is how Mbappé lamented Dembélé's injury

SAD BY THE FRENCH

Valverde: "We are sad for Dembélé, we want to help him..."

Dembélé injured himself again and left crying the Barça-Dortmund!

Today highlights
IN WINTER OR SUMMER

Three players of Barça that could get in the 'operation Lautaro'

PROBLEMS IN THE SERIE A

Barça's bomb: Lautaro could be 'culé' before the market closes

Horrible news for the world of the sport: Kobe Bryant dies in a helicopter accident

RODRIGO CONTINUES TO BE 1st OPTION

Valencia vs FC Barcelona in TV: When and where see the match of LaLiga 2019-20

This is the Barça negotiations by Rodrigo Moreno