Xavi Hernández has expressed his opinion through the social media, after knowing the sentence of prison against the Catalan politicians. The ex Barcelona player thinks that is a "shame"

Of the same way that Gerard Hammered, Sergi Roberto and other components of the FC Barcelona, one of the legends of the club as it is Xavi Hernández has taken also the word and has expressed through the social networks after knowing the sentence of the 'procés'. The egarense has published a 'story' of Instagram to give his opinion on the judicial resolution, that condemns to the leaders independentistas to a sum of almost 100 years of prison, with penalties that go from among nine years to thirteen, in addition to cuantiosas economic fines.

The message of Xavi Hernández has been very clear, when writing 'shame' in Catalan, Spanish and English, beside a lacito yellow of solidarity with the Catalan politicians that they will have to be still in the prison during a long season after having happened already two years in preventive prison. Beside the writing, Xavi has planted a 'hashtag' in which it can read 'freedom political prisoners' and the name of the convicts beside his respective convictions. 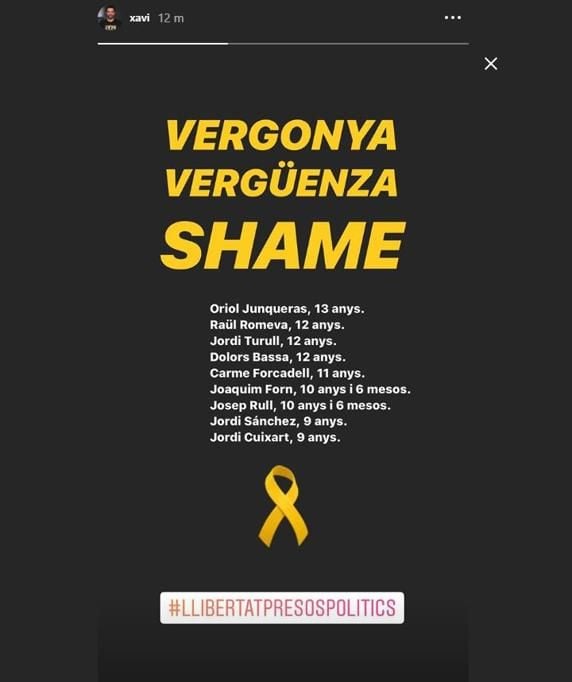 Like this, Xavi turns into one of the sportive personalities that has reacted of form more conclusive, adding to the reactions of the FC Barcelona, the Girona, the Lleida Esportiu, Aleix Espargaró, Victor Tomás and Alexia Putellas, between many others.

The sentence of the 'procés' has revolutionised to all Catalonia, salpicando so much to the sportive field as to the rest. In these hours and surely also in the days that come, the football will remain relegado to a flat second and it will be necessary to see if players like Gerard Hammered and Sergi Roberto attain to keep the concentration in his corresponding parties with the FC Barcelona.

Anybody doubts of his professionalism, neither much less, but would be logical that had the mind something more disperses of the usual in these so sad days that live in Catalan earths. The FC Barcelona will confront to the SD Eibar in Ipurua this next Saturday to the 13 hours, and along this week the ones of Ernesto Valverde will begin to prepare the party in his sessions of training.

Rakitic Remained 'hanged' in The Prat

The international that have played these days with his selections will go reincorporando of progressive way, and expect that they do not have the same problems that Ivan Rakitic to return to his domiciles. To the Croatian, remember, has seen him in the last hours walking by the autovía after arriving to the Airport of The Prat of Llobregat, because of the courts and demonstrations in the zone.

Barça's statement on the sentence to Catalan political prisoners

AFTER THE MATCHES WITH CROATIA

Rakitic remained trapped in El Prat for the 'tsunami' of protests!

There was a Laporta/Koeman meeting after the draw against Cádiz

KOEMAN WILL BE AGAINST LEVANTE

Barça will keep Koeman in his position for the moment

TENSION ON THE RETURN TO BARCELONA

Barça players, sunk after the draw against Cádiz

ALLEGATIONS FOR 2ND YELLOW TO FRENKIE

IN THE PREVIOUS OF THE BARÇA-CÁDIZ

Bartomeu prepares a new missile with the Barcelona in looks it

PIQUÉ, PROTAGONIST OF THE EVENT

The possible candidates that could relieve to Ronald Koeman

Squad list of Koeman for the Cádiz-FC Barcelona of League