Contested already the six days of the phase of groups, is necessary to do a small review of how goes the classification of maximum scorers of the Champions League 2019-20

Already it has finished the phase of groups of the UEFA Champions League 2019-20, by what know which are the 16 clubs that will play the eighth of final of the competition and, by against, those that will have to conform with the Europe League or simply already are out of European tournaments. The case is that, of the 16 surviving clubs, it will be necessary to see which players achieve to keep his series of face to the rival goal.

Because, if we throw a glimpse to the table of maxima goleadores of the Champions 2019-20, will be able to see how there are some players that have signed a liguilla estratosférica to level goleador but already are deleted, like Haaland (Salzburgo), whereas others like Robert Lewandowski keep brilliant numbers and go on in the following round.

To individual level, is clear that the phase of groups of the present League of Champions has left big moments. Robert Lewandowski was the big protagonist​ in the fifth day when marking four goals against the Red Star. Karim Benzema also annotated a doublet against the PSG, Harry Kane followed suit against the Olympiacos and Leo Messi, although it is very far of the maxima realizadores, never is descartable in the fight by the 'Pichichi'. 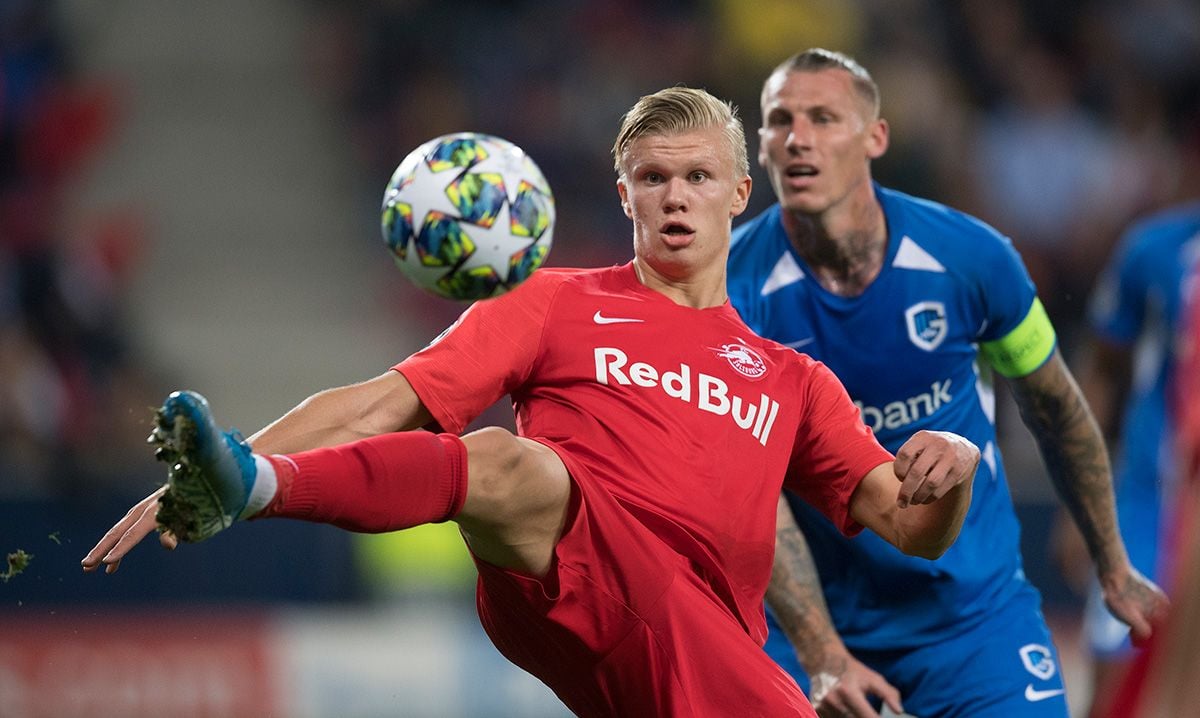 Erling Haaland, during a party with the Network Bull Salzburg this season

The Argentinian was the maximum goleador of the competition the past campaign with 12 goals, and although in this has almost impossible to repeat award, the Barça goes on in the tournament and 'The Flea' could take advantage of it. The '10' culé only carries two targets and is to 8 of Lewandowski, that is, with difference, the maximum artilleryman of this Champions. The Pole accumulates already 10 so many and has put the direct to the prize that accredit him like the best goleador of the tournament.

After the '9' of the Bayern find to the big disclosure of the tournament, Erling Haaland, with 8. Harry Kane is third after having annotated six goals in the five meetings contested. Raheem Sterling pursues to the tip of the 'spurs' with 5 targets to contribute to the classification of the City like leader of his group. The Korean Are also carries 5 and is empatado with the 'citizen', of the same way that Kylian Mbappé (PSG), Mertens (Napoli), Icardi (PSG), Lautaro Martínez (Inter) and Memphis Depay (Olympique of Lyon).

Also there is goleadores 'covered' as Achraf Hakimi, the player that the Real Madrid yielded to the Dortmund like side, but that already accumulates four goals with the group that trains Lucien Favre, after having changed his demarcation to the one of extreme. Other stars consecrated, as Mohamed Salah, Gnabry and Benzema, do not walk very far of Suárez and Messi with his four so many.

The first Barcelona of the list of maxima goleadores is not another that Luis Suárez. The charrúa marked two targets against the Inter of Milan to trace back the crash in the Camp Nou and saw again goal against the Borussia Dortmund in the fifth day. After the forward blaugrana would arrive Leo Messi that only it has marked two so many, one against the Slavia, in Prague, and another against the Dortmund in the turn. When they begin the key parties with the eliminatory of eighth of final, was cual was the rival, sure that the '10' begins to trace back positions.

THE DRAW, THE MONDAY AT THE 12H

Today highlights
THE DANISH, IN THE DIARY

Surprise operation: Barça would go for Eriksen this January!

BARÇA AND MADRID WILL BE IN THE PUMP

REAL MADRID, THE HARDEST ONE

The press makes campaign: Criticism to Barça and support for Real Madrid

A YEAR SINCE HE SAID 'YES' TO BARÇA

SETIÉN HAS LEFT 3 STARS AT HOME

List of summoned of Setién for the Ibiza-FC Barcelona

THE FRENCHMAN, AIM OF THE REAL MADRID

THE BARÇA, IN NEGOTIATIONS

Barça would already have Rodrigo's 'OK': he would arrive on loan from Valencia