Kobe Bryant always had a good relationship with the FC Barcelona, and visited several times the team in Barcelona and the USA

It has left us one of the big legends of the sport. Kobe Bryant lost the life this Sunday in an accident of helicopter beside five people more, between them his daughter of 13 years Gianna Maria Onore. During his professional career in Los Angeles Lakers, Kobe always showed his admiration by the FC Barcelona, to the that called "my team of favourite football".

It starred several episodes in which it coincided with the first Barcelona team in promotional acts and, besides, visited him in several of his turn North American during the last years. Such was his narrow relation with the Barcelona club, boosted partly by his become friends with Pau Gasol, that when it withdrew of the NBA in 2016 sounded like reinforcement of luxury for the team culé of basketball.

"I have come to enjoy of my team of football preferred"

His physical problems, in any case, carried him to decline said option in a perfect Spanish when the Spanish means asked him in this regard in one of his last press conferences. To know the first indications of the good tuning between Kobe Bryant and the Barça it is necessary to trace back to the year 2000, when the winger of the Lakers travelled until the Catalan capital to present some zapatillas with his name.

"It is beautiful that compare me with Michael Jordan, but I am Kobe Bryant and have my form to play. I want that the people that comes to see me do it for being I same", said, ensuring besides that no descartaba "play in Europe in a future". 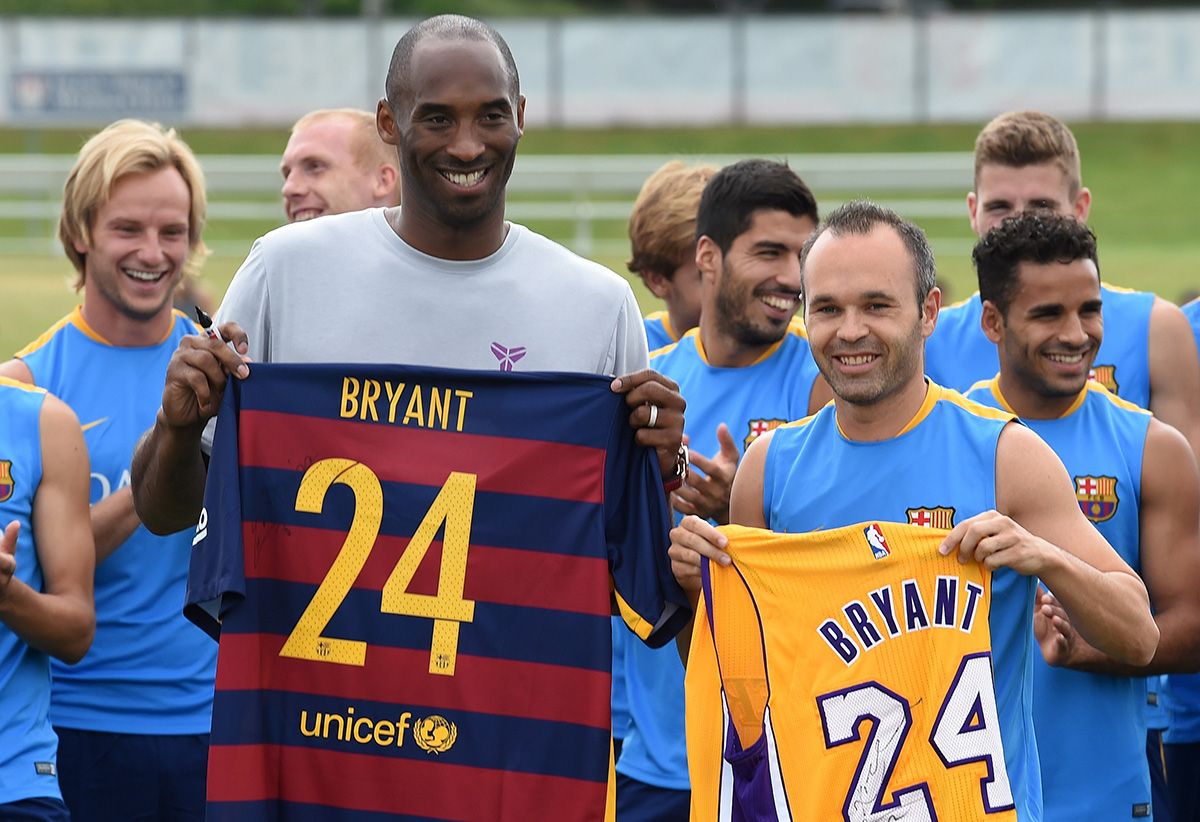 Kobe Bryant and Andrés Iniesta, in an image of archive

At the beginning of August of 2006, Kobe Bryant and Ronaldinho were the big protagonists in the party that Nike organised in Hollywood during turns it of the FC Barcelona by United States. "I am very happy to be here with you; this is wonderful", confessed him the star of the Barça to the player of the Lakers. That time, went the members of the staff culé those that asked the autographs.

In June of 2007, Kobe Bryant went back to visit Barcelona and took advantage of his presence in the city to attend to the Mini-Estadi, where trained the FC Barcelona, to greet to Ronaldinho. It commented then that "my favourite player was Rijkaard -trainer culé in 2007-, a big midfield player". It added, besides, that "is a pride can witness a training of the Barcelona. I have come to enjoy of my team of football preferred", revealed in no uncertain terms.

In 2008, Kobe Bryant played a party of exhibition in the Staples Center of Los Angeles (California) against the FC Barcelona and saw the faces with one of the stars of the team barcelonista, Juan Carlos Navarro. Before the party, Kobe planted a poster of Messi in his taquilla and undid in praises to the Argentinian. "Leo Messi is the best of the world and deserves the Balloon of Gold. It is the biggest and, in these moments, no approaches him anybody", confessed.

Kobe Bryant lost against the Barça in the Palau

In 2010, the mythical winger of the Lakers starred a very special duel with Pete Mickael, then player of the team culé. The Lakers of Bryant and Pau Gasol visited to the Barça in the Palau, and the team of Xavi Pascual won by 92-88. After the party, Kobe Bryant ensured that "the Barcelona could compete in the NBA because they play well and very coordinated. We expected a hard party and physicist, because like this we train us".

In 2011, Kobe Bryant went back to visit to the first team of football during the pre-season in United States, dressed with the T-shirt barcelonista to play a partidillo charitable and exchanged words and gestures of complicity with Pep Guardiola and some directors of the Catalan club.

Finally, in 2015 after a training of the Barça in the StarHub Stadium of Carson, Bryant photographed with the staff of the FC Barcelona and exchanged his T-shirt with the one of the captain, Andrés Iniesta. Images that remain for the memory, the same that his big gestas sportive.

Horrible news for the world of the sport: Kobe Bryant dies in a helicopter accident

Today highlights
COUNTDOWN FOR THE ARRIVAL OF THE '9'

LAUTARO IS THE FIRST AIM OF BARÇA

Inter puts the ball on the roof of Lautaro: "The players leave if they ask for it"

LEO WON'T RETURN UNTIL THIS TUESDAY

Messi, in Dubai to spend the 'holidays' that Setién has given to Barça players

CELTA PROTESTED A LOT THE PLAY

The analysis of Carles Puyol: His return to Barça, the future of Messi, Neymar...

FC Barcelona vs Getafe in TV: When and where see the match of LaLiga 2019-20