The best "meme" of the meeting FC Barcelona-Eibar

The best "meme" of the meeting FC Barcelona-Eibar

The referee of the meeting Of the Big Hill has starred the best "meme" the party after a regrettable performance in which it finish expelling to the Argentinian Javier Mascherano. The networks agreed of him and of his decision between the patadas of the Eibar

The referee Of the Big Hill has been the big protagonist, negatively, of the party between FC Barcelona and the Eibar in the corresponding meeting to the ninth day of the League BBVA 2015-2016. The referee exasperated to players and fans with a performance in which it left that the visitors employed with hardness after not to cut it of raiz.

And the social networks do not have quiet in front of the performance of Of the Hill and have agreed of him in which for us has been the best "meme" of the meeting. Especially because it reflects it sucedido in the last minutes when in place to admonish to some Basque player of which were grinding to patadas to Neymar, finish expelling to Mascherano by purportedly have abused to his referee assistant.

On the other hand, the performance of Luis Suárez and his hat trick has not happened unobserved and also has been very commented by the fans. The Uruguayan forward saved to his, and his reward roots in the admiration of all the fan to the world of the football. 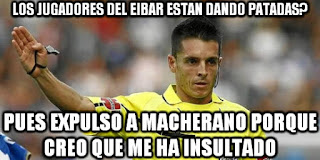 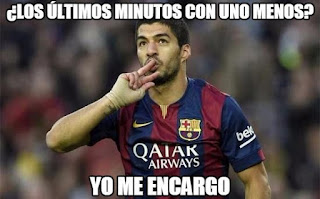 Option for Barça? Arthur Cabral, 'attentive' to the interest of the culers

The injuries and relapses cause new dismissals in the Barça

VINICIUS HAD IT DONE WITH BARÇA

THE WORST OF THE LAST DECADE

The alarming figures in the balance goleador of the Barça

LOW SENSITIVE WHAT REMAINS OF THE YEAR

Pedri alarm: Xavi already knows that the canary will not return until 2022

Xavi's squad list for FC Barcelona-Benfica in the Champions League

FC Barcelona vs Benfica on TV: When and where to watch the Champions League game

BARÇA PLAYS IT IN CHAMPIONS

Line-ups of the decisive FC Barcelona-Benfica of Champions