Ansu Fati, one of the best prodigies of the future for 'L'Équipe'

The leading youngster of 16 years of the FC Barcelona, Ansu Fati, hoards the attention of the international media and one of the newspapers of reference in France, 'L'Équipe', defines him like one of the big stars of the future

When it began the season 2019-20, few thought that Ansu Fati would turn into the best possible news for the FC Barcelona. The leading youngster of 16 years went in of rebound in the announcement of the Barça-Betis because of the big quantity of drops and, since, Ernesto Valverde has gone him giving opportunities. It sufficed the first so that Ansu took advantage of it with a big chamber of hour, in which it was about to to mark in front of the verdiblancos.

In front of Osasuna arrived his first big exhibition, whereas in front of Valencia the youngster 'crack' Spanish of guinean origin offered an authentic recital. Since, it has hoarded the attention of the big means of the international press, between them 'L'Équipe'. The prestigious French newspaper has included to Ansu Fati in a mini-series that speaks on the futures 'cracks' of the panorama futbolístico. 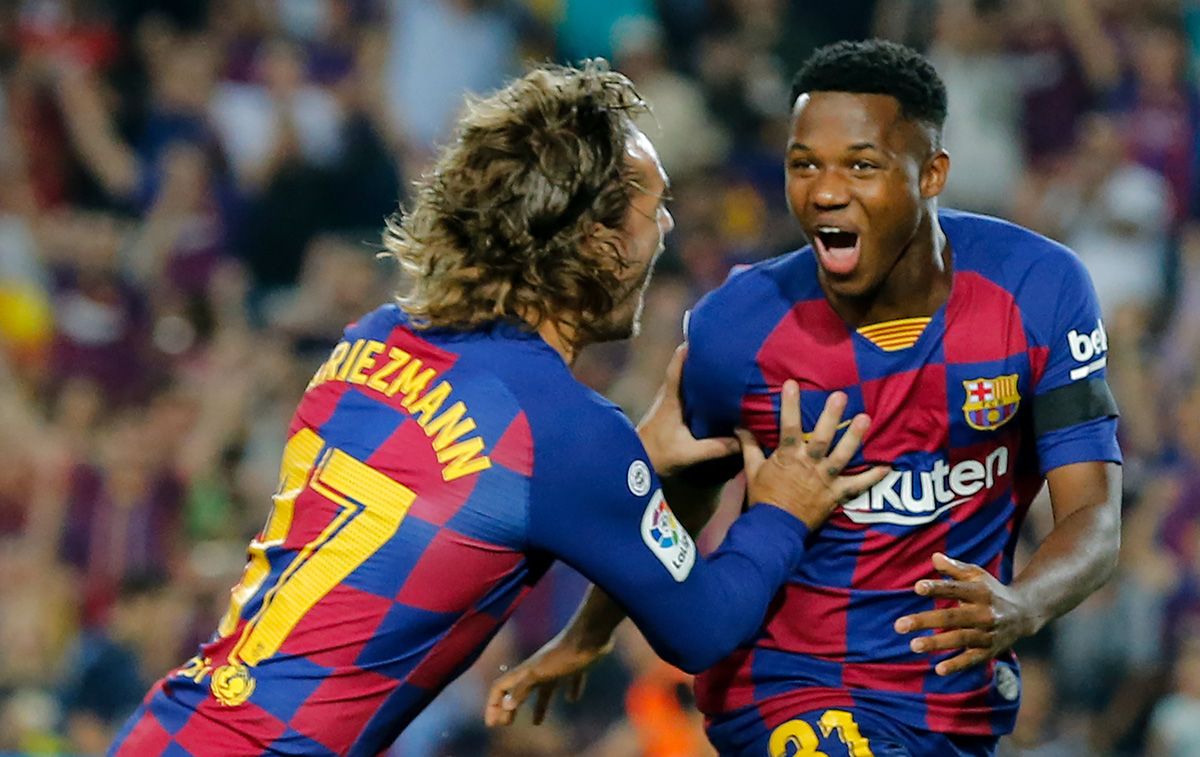 Ansu Fati, celebrating a goal at the side of Antoine Griezmann

Ansu Fati Appears the first, followed of Joelson Fernandes (Sporting of Portugal), Sebastiano Esposito (Inter Milan), Karamoko Dembélé (Celtic Glasgow), Mohamed Ihattaren (PSV Eindhoven) and Karim Adeyemi (RedBull Salzburg). Of all they, Ansu Fati is the one who has exploded faster, being able to offer big performances in a big club of Europe as it is the FC Barcelona, practically from the first balloon that has touched.

The ex Barcelona 'Wolf' Carrasco participates in the series of the quoted newspaper, and compares the case of Ansu Fati with the one of Kylian Mbappé does very few years, when it began to dazzle in the rows of the Monaco. "In addition to the talent, is very mature for his age. When has the balloon see him sober, does not doubt it, like Mbappé when it began in the Monaco", has signalled the ex footballer.

In the article on Ansu Fati, 'L'Équipe' explain how have been his starts in the FC Barcelona, stands out his tremenda progression and the fact that it began this summer the pre-season with the Barça B, although it still has not debuted officially in the filial. It jumped directly to the first team in front of the drops that accused Ernesto Valverde, and probably no longer play in another staff that was not the one of the first team.

To continuation, the French newspaper also speaks on the international impact that is having Ansu Fati in hardly some months, remembering that it already has been nationalised Spanish and that Robert Moreno included him in the prelista of the absolute announcement for the present stop FIFA, although finally the player has not been selectable by bureaucratic subjects for this month of October.

Ansu Fati, in definite, attracts increasingly the attention of the world-wide press and of the big clubs of Europe. From here that his clause of 100 million euros remain short, seeing the prices in that it is moving the market of signings along the last years. The attacker youngster of 16 years, in spite of the arrival of possible tentativas, has it clear: it wants to triumph in the FC Barcelona. And it goes by the good way, of this there is not doubt.

THE PEARLS OF EUROPE

The Ansu Fati of Europe: Minors of age that shine between professionals

Defined the 'semis' of the Europe League: The Barça will be very attentive

HE WON'T CONTINUE IN MUNICH

IN THE DIARY OF THE BARÇA

David Alaba, the ancient aim that will put more morbid to the Barça-Bayern

MORE FIREWOOD TO THE FIRE

Rummenigge, controversial: "Ter Stegen still is not a goalkeeper of world-wide size"

SEPARATED OF THE FIRST TEAM

The barter that Barça would offer to sign Bernardo Silva

VERY ATTENTIVE To THE CARIOCA

CRASH OF THE DORTMUND

Jadon Sancho would cause a 'domino effect' in FC Barcelona

IN FRONT OF THE DUEL AGAINST THE BAYERN