Ironic answer of Dembélé to those which criticise his lifestyle

Ousmane Dembélé got injured again some weeks ago, and some people took advantage of it to criticise him for his lifestyle. The french throwed a conclusive answer with an ironic publication in the social networks

The FC Barcelona confronts to a plague of injuries in this start of season, and one of which has gone back to fall is Ousmane Dembélé. After Net Walled, Leo Messi and Luis Suárez, jumped the news that the one of Vernon suffered a new muscular mishap, and the club announced through a communiqué that suffers a break fibrilar in the biceps femoral of his left leg.

This new go through the infirmary desató the enésima wave of criticisms against the French, that was accused of a little professional lifestyle. One of his ex employees, the cook Mickael Naya, took advantage of to reveal some details of his stage attending to the forward, and shortly after his agent, Moussa Sissoko, went out to the step of his comments warning that he was the one who decided to do without his services.

In the middle of all this stir has arrived an answer of the crack, that this Saturday pronounced through the social networks. The ex of the Borussia Dortmund does not be used to to do case to the speculations and the 'darts' that are used to to devote him, but is not the first time that heaves the voice of brief and conclusive form to separate the rumours and defend that his behaviour is the suitable.

The Frenchman published an instantaneous with an ironic message, "deplorable Lifestyle", at the side of an obviously opposite scene. In her could appreciate as it was seeing the Southampton-Manchester United to the lunchtime, with a dish of salmon to the iron with guarnición of paste, a juice of orange and a bottle of water. Of course, a menu of the most recommended.

In one of his interventions in front of the media, his representative already recalcó that it works beside Dembélé to improve to all the levels, something that has noticed especially in the last months. His behaviour chirría in some occasions and this has cost him more than a touch of attention, but is centred in triumphing in the Barça and one of the keys will be to leave backwards his inopportune physical fragility. 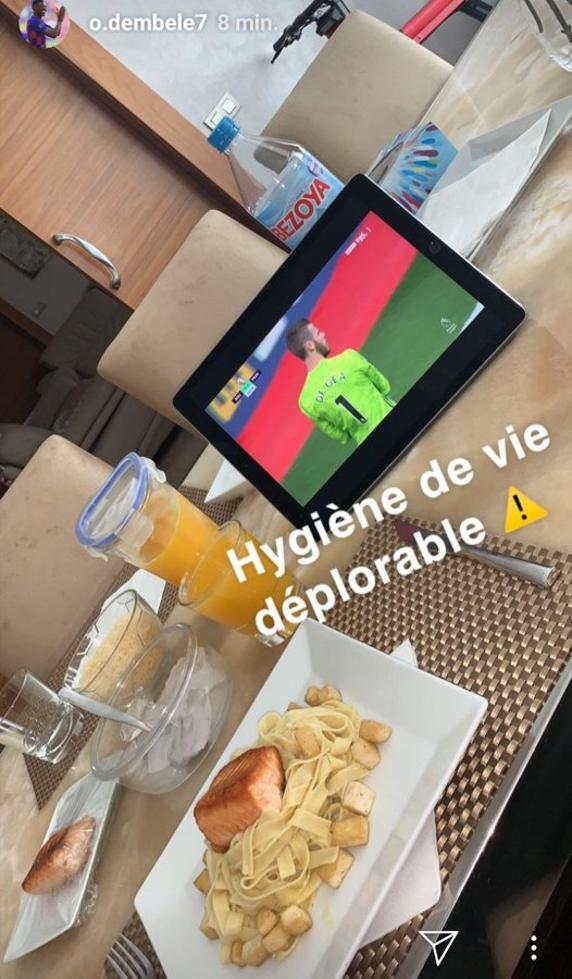 Dembélé Shared his food in the social networks

Dembélé Wants to leave backwards a very agitated summer, in which also it has seen complicated in the case Neymar. After the game of Philippe Coutinho course to the Bayern of Munich, the French appeared like key piece in a possible exchange by the Brazilian, in which it had to leave yielded to the PSG. Finally there was not agreement with the 'bleus', partly because the extreme denied to abandon the City Condal and because it is convinced to be important piece in the team. It is in his own hands.

Defined the 'semis' of the Europe League: The Barça will be very attentive

HE WON'T CONTINUE IN MUNICH

IN THE DIARY OF THE BARÇA

David Alaba, the ancient aim that will put more morbid to the Barça-Bayern

MORE FIREWOOD TO THE FIRE

Rummenigge, controversial: "Ter Stegen still is not a goalkeeper of world-wide size"

The barter that Barça would offer to sign Bernardo Silva

Like this remain the quarter-finals of the Champions 2019-20: Matches, schedules and TV

IN FRONT OF THE DUEL AGAINST THE BAYERN

SPEECH OF THE CAPTAIN

This said Leo Messi to his teammates in the dressing room