DEBT WITH OTHER CLUBS

With reason of the Assembly of Partners and in a sample of transparency, FC Barcelona published the information of payments and relative commissions to the exercise 2018-19. A data that surprises is the money that owes the club in signings

The managerial board of the FC Barcelona seems had to boost the transparency with his partners, and during the Assembly of Compromisarios celebrated the past Sunday made public the annual memory of the Barça, corresponding to the exercise of the season 2018-19. In her they remain to the discovered informations of relief, like the debts that the club is supported by other sportive entities.

In this sense, the Barça admits a debt by value of 260,742 million euros by nine signings, 79,4 of them in the short term and 181,287, to long. Besides, has to add to this figure the credit of 35 million euros that asked for fichar to Antoine Griezmann, as well as the 18 million fixed euros that paid by the signing of Junior Firpo, and that do not appear in the relation. 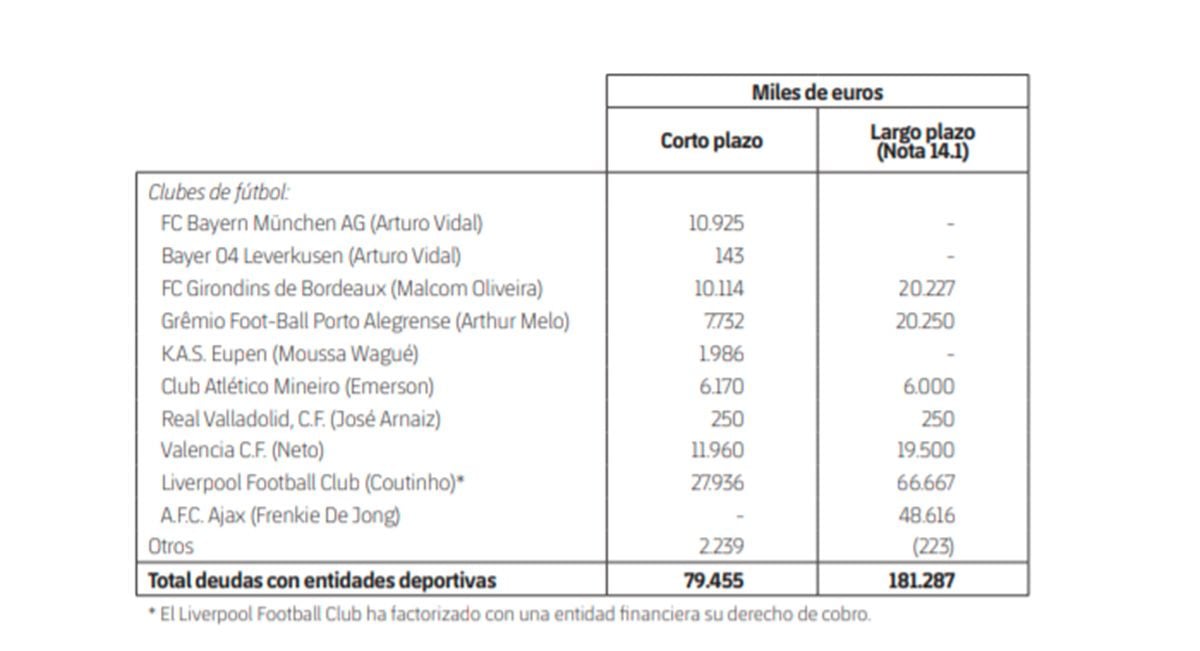 This is the debt of the Barça with sportive entities / FCB

This generates a total of 313,74 million euros that the Barça still has to pay by eleven players along the next years, with the Liverpool like main creditor of the Barça. The Barcelona club has to him 27,9 millions in the short term and 66,667 on a long-term basis, for a total of 94,6 millions derived of the 'Operation Coutinho'. In the memory, in fact, notifies that the Liverpool "has factorizado with a financial entity his right of collection".

Other clubs also owe money to the Barça

At the same time, it fits to stand out that other entities also owe money to the FC Barcelona by his operations. In concrete, are 75,3 million euros those that the Barça has slopes of collection. They stand out the 25,993 million euros that still owes the Everton by Yerry Mina (9,75), Lucas Digne (6,683) and André Gomes (9,56). The Borussia Dortmund also owes a term of the payment by Paco Alcácer (11,009) and Valencia, 13,85 millions by Jasper Cillessen.

Other clubs that also have to some money to the FC Barcelona are the Celtic of Vigo by Denis Suárez: 5,9 millions; and the Watford, that still has to 4,4 millions by Gerard Deulofeu. This, without explaining to other sportive entities with inferior debts by the traspaso of youngsters canteranos, some figures that also contabilizan in the quoted annual memory. Seeing the numbers, will be able to follow the Barça with this rhythm of signings in the next years? We will see.

DISTRIBUTION OF THE INCOME

Barça wants to win the Champions... And all the possible millions

Today highlights
THE '10' will BE THE KEY CULÉ

SANCTIONED IN FRONT OF THE NAPLES

POOR LEVEL IN FRONT OF THE NAPLES

Antoine Griezmann puts his position against Bayern Munich at risk

HE DEBUTED AGAINST THE NAPOLI

Reward for a Monchu with the future in the air

It SPOKE AFTER THE GOLEADA To CHELSEA

Thomas Müller's message to FC Barcelona for the Champions League

Like this remain the quarter-finals of the Champions 2019-20: Matches, schedules and TV

It INFORMS THE ENGLISH PRESS

FC Barcelona is left without one of its most desired signings

The possible lineups of FC Barcelona-Napoli of Champions

EX MATES IN THE BARÇA